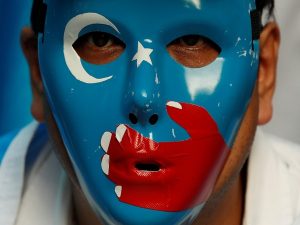 Paris Mayor Anne Hidalgo on Saturday said that France stands with persecuted Uyghurs of the Xinjiang region of China and Paris Town Hall will be illuminated in Uyghur colours on November 12.

“While many people took out a march this Saturday in support of the Uyghurs, Paris stands alongside this persecuted people. An Uyghur house will soon open in Paris, and the Town Hall will be illuminated in Uyghur colours on November 12.#FreeUyghurs,” tweeted Anne Hidalgo.

More than 2000 people gathered in Paris on October 2 and demonstrated against the ongoing rights violations of Uyghurs in Xinjiang by the Chinese Communist Party (CCP).
The protest was organised by multiple Uyghur organisations including the World Uyghur Congress and the Uyghur Institute of Europe. The protest saw the participation of hundreds of Uyghur youth who had travelled from various European countries as well as public figures like Raphael Glucksmann, Member of European Parliament (MEP) and French actress Lucie Lucas.

The protestors marched from Bastille square to place de ka Republique shouting slogans ‘genocide in progress’ and ‘Save the Uyghurs’ and carrying banners and East Turkestan flags. During the speeches, a call was made to the international community to cancel all agreements between the European Union and China as well as boycott the Beijing Winter Olympics 2022.

The Uyghurs are facing discrimination in the Xinjiang Uyghur Autonomous Region (XUAR) under Beijing’s rule, as authorities tried to assimilate the ethnic group by restricting religious practices and use of the Uyghur language.

The repression of the Uyghurs has gotten progressively worse since Xi Jinping. China has held up to 1.8 million Uyghurs and other Muslim minorities in a network of detention camps since 2017, RFA reported.

China has been rebuked globally for cracking down on Uyghur Muslims in Xinjiang by sending them to mass detention camps, interfering in their religious activities and subjecting them to abuse including forced labour. (ANI)