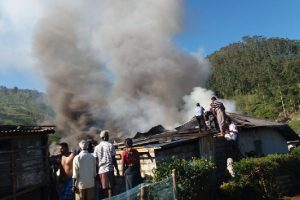 Five people including children have been killed in a fire in Ragala, in the Nuwara Eliya District.

The fire had erupted in a house which was among some line houses in the area last night.

The Police said that two children were among those confirmed killed in the fire.

The children were aged 1 and 11 years.

The other three were said to be two females and a man. (Colombo Gazette)