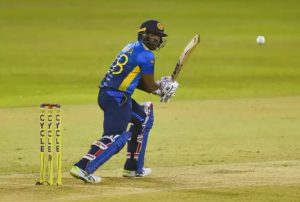 Avishka Fernando made his career-best 83 before Sri Lanka sealed the opening T20I by 19 runs against Oman. The visitors took a 1-0 lead with Lahiru Kumara bagging four wickets to ensure a late charge from Oman wasn’t enough to take them over the line.

Ahead of their departure, head coach Mickey Arthur spoke about improvements in the batting and fielding department to complement the bowling. Put in, Sri Lanka were soon reduced to 21 for 3 with Pathum Nissanka making 8 while Dinesh Chandimal and Kamindu Mendis registering first-ball ducks. Fayyaz Butt was on a hat-trick at the end of the second over but Nissanka saw off that threat only to fall to Kaleemullah.

At the end of the powerplay, Sri Lanka had 24 for 3 on the board and needed a period of reconsolidation. Bhanuka Rajapaksa too struggled for rhythm and managed only 15 off 21 before Fernando’s rescue act.

Fernando was dropped in the 17th and 18th over as Oman were made to pay heavily for their mistakes. The penultimate over by Mohammad Nadeem was taken for 22, while Butt leaked 20 in the final as Shanaka got his half-century on the last ball on the final over. The pair made 111 for the fifth wicket to bat Oman out of the contest.

The late assault handed Sri Lanka the momentum and the bowlers started well to reduce Oman to 23 for 4 by the end of the fifth over. The batters continued to find it tough to score freely and Oman further slipped to 87 for 6 in the 15th over.

Khushi fell on the final delivery of the match with the game have been well beyond Oman from quite early. But he smashed 40 off 22 to take the hosts close and ensure Sri Lanka were on their toes right till the end.