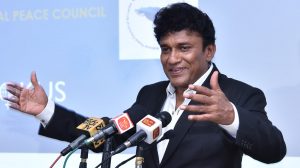 The Tamil Progressive Alliance (TPA) has urged India to push Sri Lanka to fully implement the 16th Amendment to the Constitution.

The request had been made when the TPA led by former Minister Mano Ganesan met Indian Foreign Secretary Harsh Vardhan Shringla recently.

In a media release, Ganesan said that the 13th Amendment to the Constitution must be fully implemented and the Provincial Council elections expedited.

“We want immediate elections for the Central, Western, Uva and Sabaragamuwa PCs along with the Northern and Eastern PC.

Ganesan added that the 16th Amendment must also be fully implemented to ensure the dignity of the Tamil language.

The TPA leader pointed out that the 16th Amendment has been completely ignored and forgotten, adding that it was through this amendment that Tamil language was recognized as an administrative language, an educational language and a judicial language.

“Both the 13th and 16th Amendments were incorporated into the Constitution of Sri Lanka through the Indo-Lanka Accord. Therefore, we believe that the Government of India has a responsibility in this regard,” Ganesan noted.

The TPA pointed out that the families of Tamil workers living in the plantations have been denied land rights.