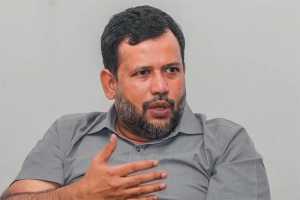 The Samagi Jana Balawegaya (SJB) today claimed that jailed Parliamentarian Rishad Bathiudeen has been forced to urinate in a bottle after 5pm.

SJB Parliamentarian Lakshman Kiriella said that the MP cannot go to the toilet after 5pm.

As a result, he said the MP is forced to urinate in a bottle in the cell.

Kiriella urged Speaker Lakshman Yapa Abeywardena to intervene and protect the rights of the MP.

The Government, however responded saying that when the opposition was in Government the same procedure was followed.

Minister Johnston Fernando said that even they had to urinate in bottles after 5pm when they were jailed in the past.

Rishad Bathiudeen has been jailed over the Easter Sunday attacks. (Colombo Gazette)