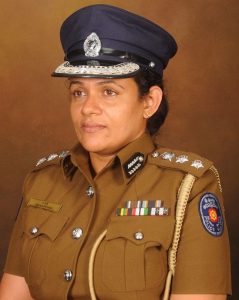 For the first time in Sri Lanka three female cops have been promoted as Deputy Inspector General (DIG) on the same day.

The three Senior Superintendents of Police (SSP) were promoted to the rank of DIG with immediate effect.

SSPs Renuka Jayasundara, Nishanthi Seneviratne and Padmini Weerasuriya were promoted with the approval of the Ministry of Public Security.