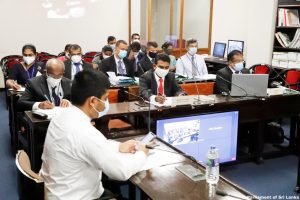 The Committee on Public Enterprises (COPE) has unearthed serious financial mismanagement at the Sri Lanka Transport Board (SLTB).

COPE had found that the SLTB had spent Rs. 89 million to purchase computers in 2018, exceeding the funds approved.

However, SLTB had purchased 800 computers and 47 laptops exceeding the funds approved through the general accounts of the Transport Board.

The particulars were disclosed at the COPE Committee meeting chaired by Prof. Charitha Herath, Member of Parliament. The Committee met to examine the Auditor General’s Reports for the years 2017 and 2018.

The COPE Committee chair expressed his displeasure over the funds spent without due process.

It was also revealed that and agreement had been entered into with a private company at a cost of Rs. 33,628,840 to purchase equipment required to maintain the system for cameras and GPS in 125 luxury buses.

However, the COPE Committee revealed that all except a few of these devices were in working condition. Officials present at the meeting said that the employees of these buses had deliberately damaged the equipment and that an investigation was underway.