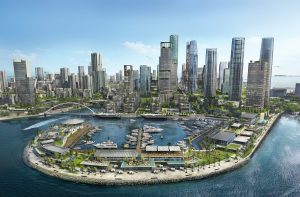 The United States says it continues to be concerned about some aspects of the Port City legislation that was passed in Parliament.

The US Ambassador to Sri Lanka, Alaina B. Teplitz says there appears to be openings for corrupt influences and the potential for illicit financing, money laundering, and/or other activities by nefarious actors who want to take advantage of what they perceive to be a permissive environment for illegal activity.

She expressed these views in an interview with the Centre for Strategic Studies.

“US companies are going to be wary of that. US companies considering investing in Sri Lanka want predictability and a clear understanding of the investment environment. They’re going to need to know that if they’re investing, they’re not going to be confronted with risks that could present problems for them, either from regulatory bodies, their own shareholders, or their boards of directors. Under the Foreign Corrupt Practices Act (FCPA), it is unlawful for a US company or individual to offer, pay, or promise to pay money or anything of value to any foreign official for the purpose of obtaining or retaining business,” she said.

The Ambassador noted that a US company considering investing in Sri Lanka must be confident that they’re not going to be exposed to – or collaborating with – entities that could have economic measures levied against them by the U.S. Treasury or Commerce Department.

Teplitz said that the US recognises that the Government in Sri Lanka wants to take advantage of the investment already made in the Port City project.

However, she said the simple caution is that for such a large infrastructure / development project, it is incredibly important to get the legislation and regulations right – and ensure the door is not left open to illegal activity and unfair competition.

She also noted that the Hambantota port project incurred a tremendous amount of debt for the country, and ultimately Sri Lanka needed to lease out the port for the next century as a result.

“The Colombo Port City could possibly open Sri Lanka to a host of suspect economic practices and corruption,” she added.

The Ambassador said that ensuring the right conditions prevail in order to attract high quality, US private sector investment and to help Sri Lanka stake its claim as an attractive and reliable economic partner in the region should be a priority policy goal for the Government.