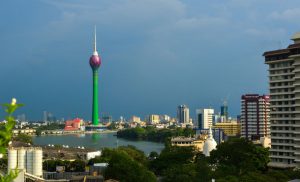 The Government has decided to give more land to the Lotus Tower project in Colombo.

The decision was taken by the Cabinet based on a proposal put forward by President Gotabaya Rajapaksa.

The Government said that construction activities of the Lotus Tower project is nearing completion.

The Telecommunication Regulatory Commission is now planning the commercialization aspect of the project.

The President had noted the need to construct a modern water park near the Beira Lake in close proximity of the tower in order to attract local and foreign tourists.

It was also noted that food stalls, offices, accommodation and infrastructure facilities for the staff expected to be engaged in the services at the tower need to be constructed, while a further extension of the existing car park close to the tower also needs to be carried out.

Accordingly, a resolution tabled by the President, as the Minister of Technology, to transfer land in the extent of 4 acres, 3 roads and 24.47 perches in the proximity of the tower project which belongs to the Urban Development Authority to the Sri Lanka Telecommunication Regulatory Commission was approved by the Cabinet of Ministers. (Colombo Gazette)