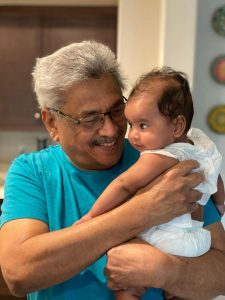 President Gotabaya Rajapaksa returned to Sri Lanka today after an extended stay in the US.

The President left for New York on 18th September to attend the UN General Assembly.

The 76th Session of the UN General Assembly ended on 30th September.

In a Facebook post Rajapaksa said that he met his granddaughter for the first time while in the US.

“During my recent visit to the United States to attend the UN General Assembly, I was able to see my granddaughter for the first time. I extend my best wishes again to my son Manoj and daughter Sevwandi on becoming parents for the first time,” he said.

The President took key decisions from the US despite being away after the completion of his scheduled meetings. (Colombo Gazette)

President has not admitted he had failed