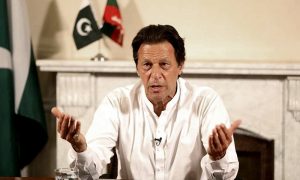 Shortly after the International Consortium of Investigative Journalists (ICIJ) on Sunday unveiled “Pandora Papers” — a major international research into the financial secrets held by high-profile individuals around the world — Pakistan Prime Minister Imran Khan said his government would investigate all citizens mentioned in the report.

Among those named as holding foreign assets are Finance Minister Shaukat Tarin, his family, and the son of Prime Minister Imran’s former adviser for finance and revenue, Waqar Masood Khan.

“My government will investigate all our citizens mentioned in the Pandora Papers and if any wrongdoing is established we will take appropriate action. I call on the international community to treat this grave injustice as similar to the climate change crisis.”

According to the ICIJ, in the 48 hours leading up to the publication of the Pandora Papers, ARY News reported that “the owner of two offshore companies registered at a similar address as of Prime Minister Imran Khan has revealed that they were registered by him on a different address and denied any role of the premier in this regard”. The story also attributed the information to “a database of the offshore companies”.

ICIJ added that ARY is not a partner and doesn’t have access to ICIJ data. It did not provide more details of the said company in this report.

The consortium said: “In its reporting prior to publication, ICIJ had asked Khan about the same companies. A Khan spokesman told ICIJ that the prime minister had no link to either, adding that two houses in the same neighborhood share an address, providing a map as evidence.

“The spokesman also told ARY News that Khan denied any connection to the companies, adding that their owner ‘never met Imran Khan face to face and it may however be possible that they had attended an extended family function’.”

Ahead of the release, Special Assistant to the Prime Minister on Political Communication Dr Shahbaz Gill had categorically denied Prime Minister Imran having any offshore company.

Addressing a gathering in Faisalabad, Gill stressed that if any other member of the government was found to have hidden offshore assets, they would have to answer for themselves. “Everyone has to go into their own grave,” he said.

“The entire country is not the prime minister’s offspring if they are caught doing anything wrong … everyone has to answer for their own actions,” he had added. (Courtesy Dawn)