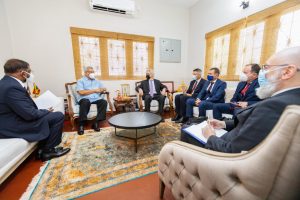 The European Union (EU) has sought a timeline from Sri Lanka to address concerns on the Prevention of Terrorism Act (PTA).

The issue had been discussed when an EU delegation held talks with President Gotabaya Rajapaksa today.

The President assured the EU that clauses of concern in the PTA will be amended soon.

The EU delegation is in Sri Lanka to review the GSP Plus trade concession provided to the country.

President Rajapaksa told the EU delegation that as the oldest democracy in the region, which has never been under a dictatorship or an authoritarian regime in any period of its history, Sri Lanka will provide solutions for issues through a democratic system.

The President also stated that the country would abide by the agreements on human rights in the world today.

The EU delegation said that a formal report based on the findings of the visit would be submitted to the European Commission and the European Parliament. (Colombo Gazette)