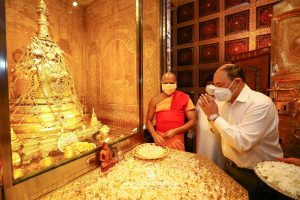 If anyone wants to link Indian Foreign Secretary’s ongoing three-day Sri Lanka visit to the just-concluded the three-party Western Container Terminal (WCT) involving India’s private sector Adani Group as the majority stake-holder, he may be mistaken. Discussions on the WCT at Colombo Port have been going on for months but Secretary Shringla’s visit was planned and scheduled only in recent days, not even weeks.

It does not stop there. Since the commencement of the WCT negotiations, New Delhi has repeatedly clarified that this was no substitute for the aborted three-nation ECT pact, also involving Japan and at the government-to-government level. In comparison, the 35-year WCT construction-cum-concession contract involves, apart from the Adani Group, Sri Lanka’s private sector, John Keells Holdings. Only the public sector, Sri Lanka Ports Authority (SLPA) is the constant – but that is no consolation for the Government of India and/or its Japanese counterpart.

Both India and Japan should have felt cheated as the Sri Lankan Government, which had cited labour protests to cancel the ECT pact initialled by its predecessor, did not wink when trade unions opposed the China-funded Colombo Port City (CPC) Bill, when presented to and passed by Parliament. ‘Sinhala-Buddhist nationalist’ groups like Gnanasara Thero’s Bodu Bala Sena (BBS) was the missing-link after taking to the streets demanding the termination of ECT, but only after the change of Government, but looking the other way, when it came to the CPC and CPC law.

In his constitutionally-mandated opinion to Parliament before the passage of the Bill, the Supreme Court too underlined some of these reservations. The court’s advice needed to be incorporated before Parliament could take up the Bill for passage. This apart, there was this advance alert from the US Embassy in Colombo about the possibility of massive money-laundering, using CPC as a front as an when the proposed international financial-hub begins operation from what otherwise is a Special Economic Zone (SEZ) in international parlance.

At least, all this should become clear after seeing Sri Lanka’s experience with the Hambantota Port deal, also involving China. What was originally a construction-cum-concession contract with a Chinese firm, overnight became a debt-equity swap, involving a 99-year-lease of Sri Lankan territory, supposedly to a Chinese corporation. It is supposed to be different also from the Chinese State, which has consequences, both of the positive and negative kinds.

In the case of the CPC, too, if and only if the lease pact runs into some hassles would the Sri Lankan people get to know if there are arbitration classes, and if those facilities are to be located inside China, or will be independent of China, say, in Singapore, as has been the practice in these parts. But that need not happen here and now, but can take years and decades, instead – not that anyone wishes that kind of situation to emerrge.

What is still significant, unforgettable and possibly unforgivable, purely from an Indian stand-point is the Sri Lankan political consensus that went beyond the Hambantota swap-deal, despite the Rajapaksas’ protests to the same while in the Opposition.  The concerns, though not of the Indian Government, per se, does not stop there, instead.

While on paper, the WCT deal is loaded against the Sri Lankan public sector, as the SLPA holds only a 15-per cent stake against the private sector’s 85 per cent, comprising 51 per cent for the Adanis and 34 per cent for John Keells, the reality may turn out to be different, if it came to that. In effect, it is only 51-49 in favour of the Adanis as John Keells, despite professed private sector identity, is Sri Lankan, first and last.

The forgotten, but unforgettable experience of India’s Apollo Hospitals Group, which quit Sri Lanka after running a private sector hospital, for a time, again over a decade back, is but only a lone precedent. But in the otherwise positive post-war investment climate, it put away other Indian investors, who were unsure of their own future. At a time when the forex crisis and the attendant steep economic downturn needs every dollar that the nation can attract to set both on the right course, any mis-step now, or even a possibility thereof, can backfire – and for good. Indian investors may not be the only one then to stay away.

More to trade than to security?

Somewhere along the past decade and more, the Colombo Government seems to have concluded that India’s concern vis a vis Sri Lanka pertains only to strategic security, and nothing more. Translated, the official Sri Lankan perception is that as long as New Delhi gets the right vibes on the security front vis a vis China, Colombo has nothing to worry from New Delhi. The question of Sri Lanka having to fear India does not arise, anyway – now or later, as successive Governments in New Delhi has proved time and again, that land-grabbing, even if of the Hambantota variety, is not on India’s copy-book.

In the Sri Lankan past, the quick withdrawal of the IPKF – sent in at the specific request of the JRJ Government – was a pointer as far back as the eighties. India rushing humanitarian assistance abroad naval vessels and Air Force transporters at the height of 2004 tsunami proved that New Delhi did not require a military base in Sri Lanka to reach out aid and assistance, as was being made out by a motivated section in the country.

Elsewhere in the region, be it the historic ‘Bangladesh War’ (1971) or ‘Operation Cactus’ (1988) in common neighbour Maldives, to help the local government overcome a coup-bid, Indian forces withdrew, first from the streets and soon from the respective countries, without asking themselves, “What after we left?”. Much earlier in Sri Lanka, then Ceylon, the aborted ‘First JVP insurgency’ of 1971, too, witnessed a similar behaviour on the part of India.

The question thus is not about India as a security concern for Sri Lanka, or only about India’s security concerns about third nations using Sri Lankan territory against Indian interests, be it across the Palk Strait or in the shared Indian Ocean waters. The conversion of the three-nation ‘Maritime Security Agreement’, also involving Maldives, into a ‘Maritime and Security Agreement’, as happened in November last, is thus only a part of India’s Sri Lanka concerns.

The fact is that on the non-security front, Sri Lanka has been seen as being biased against India and favourably disposed towards India’s adversaries, in trade and economic matters. The ECT-CPC comparison is only one. On very many occasions, Indian officials negotiating various trade and economic deals with their Sri Lankan counterparts have felt the heat of avoidable yet inexplicable delays in local officials processing the commonly agreed-upon proposals and projects. In the current context, China gets an easy wave through.

India has thus often been left to wonder if the so-called delays at the Sri Lankan Government level, be it in the Attorney-General’s department (not at present), or elsewhere in the bureaucratic lanes and by-lanes, is only as much or if there is something more to it – as a political directive, or absence of the same. At a time when Sri Lanka is looking up friends and neighbours (also) like India (whatever be the equation and expectation from China), Colombo needs to clear those cobwebs, real, imaginary or artificial.

Sri Lanka cannot continue to declare that it had offered Hambantota Port to India, more than once. That was in the past. Around the same time, the two nations also initialled bilateral CEPA, which was stalled just ahead of the signing ceremony at Colombo with then Indian Prime Minister Manmohan Singh in attendance. That was way back in 2008, when Sri Lanka needed India more than since, to bring the LTTE war to a successful conclusion.

Then again, there was an inexplicable protest against CEPA, inexplicably permitted in the high-security area around ‘Temple Trees’, the official residence of then President Mahinda Rajapaksa, now Prime Minister. More than a decade and alternate Governments down the line, the CEPA or its replacement ETCA has not seen the light of the day. Less said about other Indian economic initiatives and projects, with no tags attached, and their fate in some Sri Lankan ministerial office, the better.

As Secretary Shringla now commences a new set of initiatives – rather proposals from the host – with Finance Minister Basil Rajapaksa, on the kind of Indian assistance required and could be made available to tide over the current food and forex crisis, Colombo should remember that as Joint Secretary handling the Sri Lanka Desk in the past, he was aware of and alive to the reality of it, of which he too was a participant, after all!