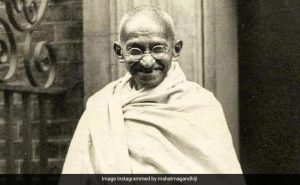 His ideals also made it possible for other countries in Asia and Africa, where Mahatma Gandhi spent a big part of his life, to free themselves from colonial rule without bloodshed. He inspired generations to think of “Swaraj” and struggle for it peacefully. To him, Swaraj did not only mean “self-rule” but it encompassed all spheres of life.

Born in a middle-class family in Porbandar, Gujarat, Mohandas Karamchand Gandhi moved to Rajkot at the age of 7, when his father became the dewan of the area. He did his schooling in Rajkot. Multiple accounts of his life have described him as an average student who was shy and timid in those years. When he went to study in England, he adapted himself to the new lifestyle. But when it came to food, he preferred his Indian roots.

His struggle with the authorities in South Africa, where he had gone to help a client as a lawyer, and the racial biases he and other Indians were subjected to brought a considerable change in him. This paved the way for him to become a Satyagrahi. On his return to India, he had already left the suit he wore as a barrister for khadi and resorted to minimalism.

Mahatma Gandhi launched his first civil disobedience movement in Champaran district of Bihar in 1917 to protest the injustice meted out to tenant farmers.

Mahatma Gandhi was imprisoned several times in his pursuit of non-cooperation. He sat on fasts to protest the oppression of the downtrodden. His path of peaceful resistance and mass civil disobedience was later emulated across the world. His selfless love for the poor and his desire to help them have a dignified life made him the “Mahatma” we call him today.

The UN General Assembly announced on 15 June 2007 that it adopted a resolution which declared that 2 October will be celebrated as the International Day of Non-Violence.

Introducing the resolution adopted by the 192-member body, Anand Sharma, India’s then Minister of State for External Relations, said the idea originated at an international conference on “Peace, Non-Violence and Empowerment – Gandhian Philosophy in the 21st Century” convened in New Delhi in January this year.

The late leader’s “novel mode of mass mobilization and non-violent action” brought down colonialism, strengthened the roots of popular sovereignty, of civil, political and economic rights, and greatly influenced many a freedom struggle and inspired leaders like Nelson Mandela and Martin Luther King Jr., Sharma stated.

The Assembly, “desiring to secure a culture of peace, tolerance, understanding and non-violence,” invited States, UN bodies, regional and non-governmental organizations (NGOs) and individuals to commemorate the Day, including through education and public awareness.

In a further effort to promote a culture of peace and cultural diversity, the Assembly also decided to recognize the year from 12 September 2007 to 11 September 2008 as “the year commemorating the Ethiopian Millennium.”

Highlighting the significance of the event, then Ethiopian Ambassador Negash Kebret Botora, said it is “not only for celebrating the unique and distinct nature of our system of calendar” but also “helps promote and further strengthen cultural understanding among the people of the world.”

Most Venerable Mahasangha led by Dr. Wimalasara Maha Thera, Chief Incumbent and Director of the Param Dhamma Chaitya Pirivena, along with Christian, Muslim and Hindu religious leaders, namely Hon’ble Sister Chandrika Liyanarachchi, Hon’ble Hibatulla Bari Moulavia, and Hon’ble Udayakumar Sharma Kurukkal, blessed the occasion with their gracious presence. Members of the local community from all age groups, including children, adults, senior citizens, members of the police services also participated in the event. The event included offerings to the Buddha as well as Sermons and speeches about Mahatma Gandhi in Sinhala, Hindi, Burmese, and English by Venerable monk students of the Pirivena and lay devotees.

Speaking on the occasion, Deputy High Commissioner of India, Shri Vinod K. Jacob recalled that Mahatma Gandhi adopted a non-violent resistance to lead the Indian freedom struggle against the colonial British rule. Gandhi believed that a truly independent India is bound to help its neighbours. The philosophy of Vasudhaiva Kutumbakam – meaning “the world is one family”– is India’s eternal principle, which continues to define India’s policies and programmes. He stressed that as we strive to make our societies and this world a better place, we need to re-commit ourselves to the ideals of peace, satya (truth), ahimsa (Non-violence) karuna (compassion) and metta (loving-kindness), which were propounded by Lord Buddha himself and which became the guiding principles of Mahatma Gandhi’s thoughts and ideals.

Most Venerable Dr. Wimalasara Maha Thera also highlighted the contributions of Mahatma Gandhi and his non-violent mass movement, inspiring freedom struggles of both India and Sri Lanka. He underscored the global relevance of Mahatma Gandhi’s principles in the contemporary world.

This year’s celebrations on Gandhiji’s birth anniversary are special as India commemorates 75 years of its independence- “Azadi ka Amrit-mahotsav”. (Agencies)