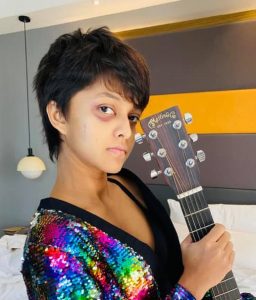 The singer, who was in India on her first tour following the success of the song ‘Manike Mage Hithe’ had knocked her face on a guitar while performing on stage.

“As I was so engrossed in the moment and performing for you I knocked my face on the head of a guitar. I didn’t realize that I bruised my face in the process as well. This is the aftermath,” Yohani said after posting an image of her bruised face.

She went on to say that the show must go on despite the minor injury.

Yohani has been exclusively signed as a Wingman India artist and will be managed by Sonu Lakhwani in India.