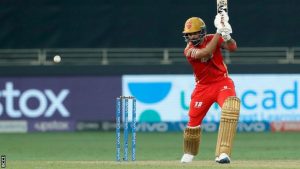 Venkatesh Iyer hit 67 off 49 but Morgan once again failed with the bat, scoring just two, as KKR posted 165-7 in Dubai.

Captain KL Rahul – the top run-scorer in this year’s IPL – scored a patient 67 off 55 as his side chased down the target with three balls to spare.

KKR remain in the fourth-place play-off spot, with Punjab in fifth.

Both teams – alongside sixth-placed Mumbai Indians – are on 10 points, but KKR have the superior net run rate while Mumbai have played a game fewer.

The IPL has a rich history of unearthing a wealth of Indian talent, and Iyer could be a new name to add to the list.

The 26-year-old – playing in just his fifth IPL game since making his debut last month – looked at ease at the crease in cricket’s most lucrative competition as he scored his second half-century of the tournament.

Iyer hit nine boundaries and one six, before he was caught in the deep by Deepak Hooda off the bowling of Ravi Bishnoi.

England and KKR captain Morgan made his way to the middle with his team on 120-3 with 5.2 overs remaining.

But he could not make the most of the opportunity, his poor form with the bat continuing as he was quickly out lbw to Mohammed Shami.

Morgan moved across his crease, looking to flick the ball to the leg side, as Shami bowled full and straight on the batter’s boot.

“It was a straight delivery and a very poor shot,” commentator and ex-IPL player Abhishek Jhunjhunwala said on Test Match Special.

Morgan has been dismissed for single figures in each of his four innings since the tournament resumed in the United Arab Emirates, after it was postponed because of coronavirus.

Things then went from bad to worse for Morgan after he dropped opener Mayank Agarwal on the second ball of Punjab’s reply.

The opener made KKR pay by smashing a 27-ball 40 and sharing a stand of 70 with Rahul, before he was dismissed by spinner Varun Chakravarthy – Morgan slightly making amends by taking the catch.

But Agarwal’s departure allowed Rahul to take over. The India opener reached his half-century in style, launching Southee for six.

Punjab made it hard work as Nicholas Pooran (12), Aiden Markram (18) and Deepak Hooda (3) fell to give KKR some late hope.

With 11 needed from nine balls, there was more late drama. Rahul swept to the leg-side and Tripathi, running in from the deep, dived full length to take a spectacular catch. But after a long delay the TV umpire ruled the ball had been grounded as Tripathi took the catch and Rahul was reprieved.

Rahul was dismissed in the next over, however, caught by Shivam Mavi off the bowling of Iyer.

KKR could sense an unlikely win, with Punjab needing four off four, but the match finished in remarkable fashion.

Shahrukh Khan – who contributed a significant 22 off just nine balls – hit the ball towards mid-wicket and Tripathi spilled a simple catch, the ball dropping over the boundary for six. (Courtesy BBC)