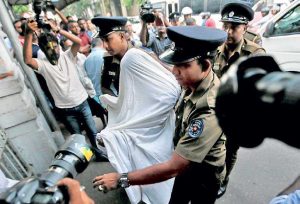 The Director-General of the Government Information Department will be informed when accredited media personnel are arrested in connection with any incident in future, Media Minister Dullas Alahapperuma said.

He said that the Inspector General of Police (IGP) had given an assurance in this regard.

The Media Minister also said that journalists will not be summoned before the Criminal Investigations Department (CID) in future.

The Minister gave the assurance at a meeting with the Editors’ Guild held at the Department of Government Information.

Meanwhile, the Minister pointed out the importance of amending and updating the Press Council Act No.5 of 1973 taking into consideration the new trends and recent developments in the media field.

The Editors’ Guild stated that setting up a separate mechanism for social media and electronic media is apt.

The Minister said that the process to amend the Press Council Act has commenced and the views of the Editors’ Guild has been sought in that regard.

He reiterated that it is expected to select 2000 schools out of 3024, and to set up Media Circles in them, and sponsor them in the future.