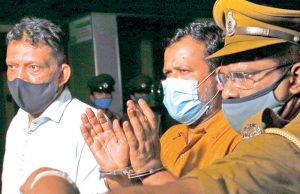 Former Minister Rishad Bathiudeen has been further remanded over the death of a 16-year-old domestic worker.

Bathiudeen, his wife and father-in-law had been arrested and remanded until 17th September over the death of the girl.

However, Bathiudeen’s wife and his father-in-law were granted bail on 17th September while the former Minister was further remanded till today.

Bathiudeen’s brother-in-law and the broker who had brought the girl to the former Minister’s residence were released on bail earlier.

The wife and father-in-law of the Parliamentarian and a broker were arrested in July over the death of the 16-year-old girl at his residence in Colombo. (Colombo Gazette)