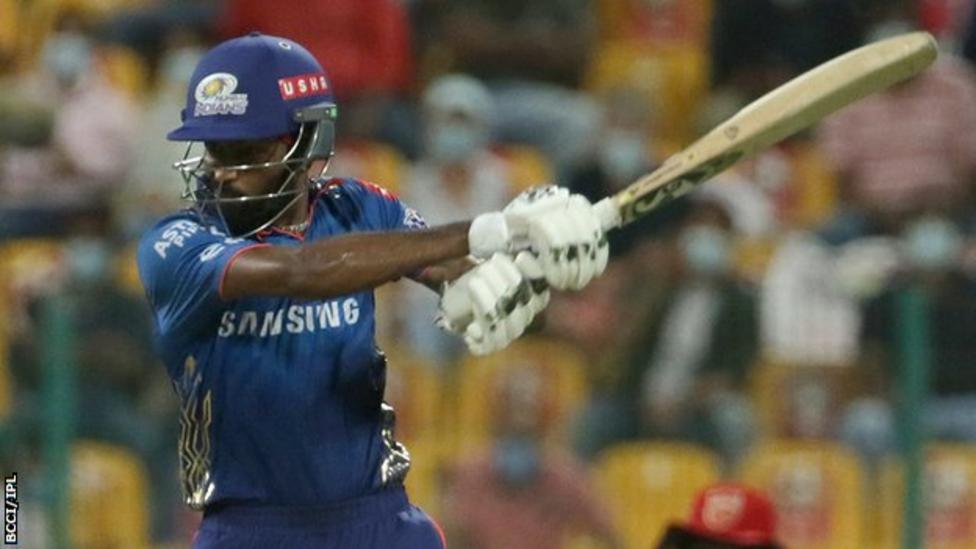 Hardik Pandya and Kieron Pollard shared an unbroken 45 to help holders Mumbai Indians to victory over Punjab Kings in the Indian Premier League.

Chasing 136, Mumbai had slipped to 92-4 but Hardik made 40 not out and Pollard an unbeaten 15 to see them home with six balls left in Abu Dhabi.

The win is Mumbai’s first since the tournament restarted nine days ago and leaves their play-off fate in their own hands.

On a slow pitch that was difficult to play shots on, Punjab struggled throughout their innings and lost regular wickets.

They slipped to 48-4 in the fourth over, with West Indies all-rounder Pollard moving to 300 wickets in Twenty20 cricket when he dismissed Chris Gayle and KL Rahul in the space of three balls in the seventh over. It made the 34-year-old the first person to do both that and have scored 10,000 runs in the format.

Markram and Deepak Hooda then shared 61 for the sixth wicket as Punjab worked towards a defendable total, but Rahul said after the game he thought 170 was needed “to be competitive”.

The final five overs of their innings yielded only 30 runs, with accurate bowling from Bumrah and Australia’s Nathan Coulter-Nile – who bowled 21 dot balls between them – allowing five-time winners Mumbai to restrict their target.

Their chase started poorly with captain Rohit Sharma, who again looked horribly out of nick, and Suryakumar Yadav dismissed in successive balls by spinner Ravi Bishnoi.

That left the champions 16-2 but a partnership of 45 between Quinton de Kock and Saurabh Tiwary, and then 31 between Hardik and Tiwary gave them a platform to win the game.

They were still left with the prospect of needing 44 from five overs, and 29 from three, but the experience of Hardik and Pollard shone through.

Hardik, who was dropped on seven, hit Mohammed Shami for a four and six, before Pollard did the same to Arshdeep Singh.

Hardik then hit Shami for two more fours in the penultimate over, before a shot down to long-on was dropped over the boundary by Hooda to seal a crucial victory. (Courtesy BBC)