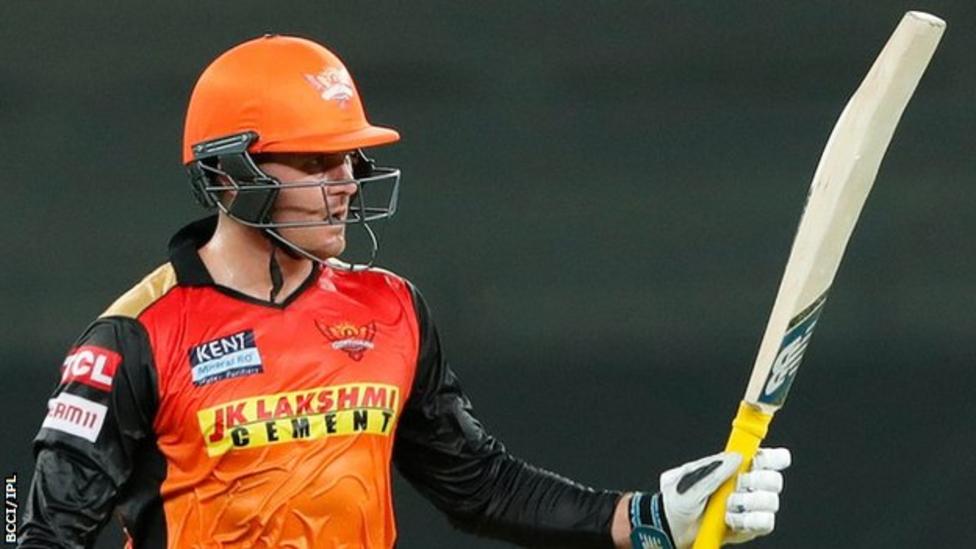 Jason Roy and Kane Williamson led Sunrisers Hyderabad to only their second Indian Premier League win of 2021 as they beat Rajasthan Royals.

England opener Roy replaced David Warner and made 60 from 42 balls on debut in their seven-wicket victory.

New Zealand skipper Williamson made an unbeaten 51 as they reached 167-3 with nine balls to spare in Dubai.

Earlier, the Royals’ total of 164-5 was built on captain Sanju Samson’s impressive 82 from only 57 balls.

Needing a win to jump to fourth in the table – and therefore into play-off contention – the Royals looked set for a much bigger total before Samson was caught by Jason Holder off Siddarth Kaul.

But some smart death bowling from the Sunrisers, and India seamer Bhuvneshwar Kumar in particular, restricted Rajasthan towards the end of their innings.

It was a measured chase from start to finish from Hyderabad, who are bottom of the eight-team table and cannot reach the play-offs, while the Royals remain sixth, needing to win their four remaining matches to qualify.

For Sunrisers, most of the pre-match discussion surrounded who was not playing, as opposed to who was.

Having scored two and nought on his return to the IPL, Australia star Warner was dropped. So often ensuring blistering starts for his side alongside England’s Jonny Bairstow – who opted not to return for this phase of the tournament – Warner’s struggles haves significantly contributed to Sunrisers’ downfall in 2021.

“It’s a bit of a strange selection because it’s very difficult for any team to keep somebody like David Warner out of their playing XI,” former IPL player Abhishek Jhunjhunwala said on BBC Radio 5 Live Sports Extra.

“But they’ve got to make some hard choices, and with Jason Roy being there, he’s one of the most attacking batters in world cricket, so why not give him a couple of games?”

Roy took his opportunity as Sunrisers reached 63-1 in the six-over powerplay and although he was dropped on 55, his bludgeoning approach was complemented perfectly by the patience of Williamson, who made a typically measured 51 from 41 balls.

Needing 50 to win from eight overs when Roy was out, Williamson – highly regarded for his calmness at the crease – never looked flustered.

He smashed two boundaries in the 19th over to take himself past 50 and his side to victory, finally giving the Sunrisers fans only their second win of a difficult season. (Courtesy BBC)