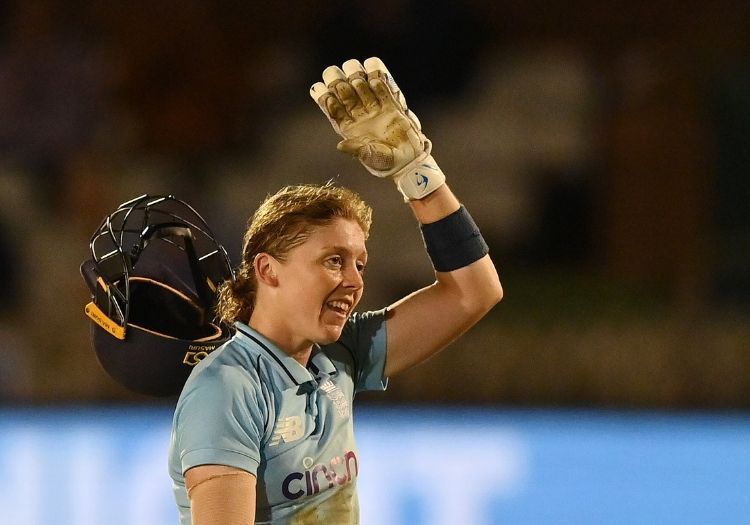 Heather Knight’s century inspired England to their highest successful run chase in a one-day international as they beat New Zealand by three wickets to clinch the five-match series with a game to spare in Derby.

Captain Knight’s brilliant 101 helped England recover from 71-3 as they chased 245 for victory under the lights.

Her 100-run partnership with Amy Jones (40) went some way to securing the game for England, but the skipper was frustrated to fall with her side still needing eight runs from the final 10 balls.

The hosts went into the final over still needing a run a ball to win, but Anya Shrubsole hit five runs from the first three balls, before a wide bowled by Leigh Kasperek – from which Katey Martin had, in vain, attempted to stump Sophie Ecclestone – handed the win to England.

New Zealand earlier reached 244-8 from their 50 overs, anchored by 65 not out from Martin and Amy Satterthwaite’s 54.

Off-spinner Charlie Dean again impressed with 3-52 before Knight produced an innings of real maturity to make only the seventh England century in a women’s ODI run chase.

The hosts were bolstered by the return of Shrubsole from an ankle injury, as she and Freya Davies took two wickets apiece in what has been a successful series for the hosts’ seamers.

The White Ferns were lacking an extra pace dimension in their bowling after opting to rest Lea Tahuhu, who took five wickets in Leicester on Tuesday, and Molly Penfold.

The final match of the series takes place at Canterbury on Sunday at 11:00 BST.

There had been no century in a women’s international this summer until Knight’s superb knock on Thursday evening.

She arrived at the crease with England in what is becoming a worryingly familiar position. Lauren Winfield-Hill again looked good in making 33 before she was bowled by Hannah Rowe, and Tammy Beaumont fell to another cheap dismissal as she fiddled at a legside Rowe delivery.

When Sciver was pinned lbw by Rowe (4-47), England were struggling. But Knight is the most reassuring figure in this England side – a calm head which has been honed by the captaincy and the rise of her limited-overs batting in the past few years.

There was no celebration when she reached her half-century. Knight knew that England were still not fully out of the trouble they had found themselves in.

Despite losing Jones, who found her best form of the series in the century stand, and Sophia Dunkley for a duck to Rowe, Knight simply kept going. Her manipulation of the field was excellent, as were her sweep shots that often found the boundary.

She and Wyatt hit 13 runs off the 44th over – including a six from Wyatt that flew over the legside boundary – to put England within touching distance.

It was only when Knight reached her century, having to dive to make her ground, that she allowed herself to celebrate – albeit with a slightly sheepish look as she picked herself up off the floor.

While the match went closer than Knight may have liked, it was testament to her skill that England were able to get over the line.

This was the first time New Zealand had batted first in this series and they took full advantage of the opportunity, putting together their most complete batting performance.

Admittedly, they once again found themselves in a tricky position, losing three wickets for nine runs in 22 balls as they slipped to 33-3.

The difference this time was Satterthwaite, Sophie Devine and then Martin were able to put together partnerships, with England dropping four catches in a tired fielding effort.

Devine counter-attacked straight away, slog-sweeping a six and hitting five fours, while Satterthwaite took the anchor role in their 56-run stand.

When Devine fell lbw to the brilliant Dean, Satterthwaite and Martin bided their time well, slowly accumulating before starting to attack with 15 overs to go.

Satterthwaite moved to her 31st half-century – the eighth most by any woman in ODI cricket – with ease, but was left frustrated when she was bowled around her legs by Dean.

In contrast to the ever-present Satterthwaite, Martin has had a more disrupted career. Having made her debut in 2003, she appeared sporadically for New Zealand after the emergence of fellow keeper Rachel Priest, and has only been a regular in the side since the series against England in March.

Helped by Brooke Halliday’s cameo of 28 from 19 balls, Martin was able to take advantage of a weary England attack to register her first 50 in ODIs since March 2017 – and her first against England since March 2008.

Ultimately, the value of Martin and Satterthwaite’s experience showed through for New Zealand, but the top order need to contribute more if they are to start stringing wins together. (Courtesy BBC)