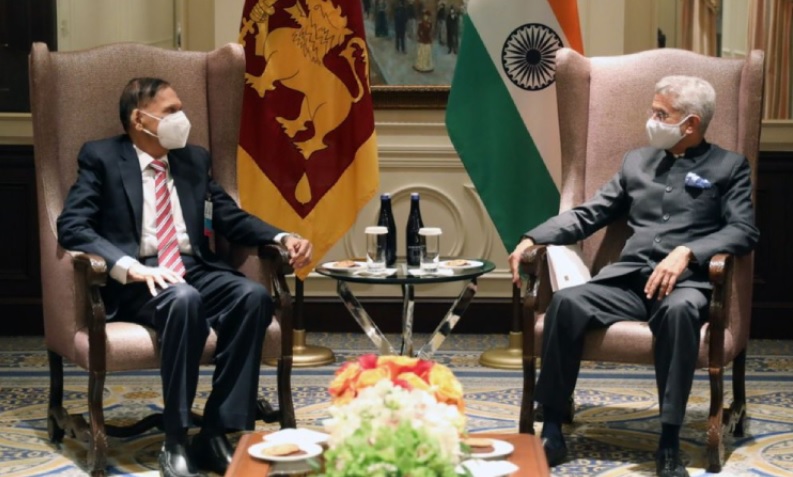 Jaishankar tweeted saying he looks forward to working with Peiris to advance their shared agenda.

The Sri Lanka Foreign Ministry said that Minister Peiris briefed the Foreign Minister about the pragmatic and tangible action taken by the government to resolve residual matters after the end of the conflict in May 2009, citing the fact that the Foreign Ministry, Defence Ministry and Justice Ministry were working collaboratively to address key issues, such as revisiting the Prevention of Terrorism Act, releasing of LTTE prisoners, and empowering independent institutions such as the Office of Missing Persons, Office for Reparations, Office of National Unity and Reconciliation, the Human Rights Commission of Sri Lanka and the SDG Council. Minister Peiris indicated that substantial progress had been made on many fronts and that efforts were continuing.

Foreign Minister Peiris further indicated that there is strong political will to move forward in many different areas of bilateral relations between India and Sri Lanka.

The Foreign Minister emphasised that Sri Lanka cannot accept any external mechanisms active on the ground, when robust domestic mechanisms are vigorously moving forward, stating that the nation was greatly encouraged by many countries standing firmly with the principled position taken by Sri Lanka that resolutions against countries cannot work without the consent of those countries. Both ministers agreed that bilateral relations between the two countries are of critical importance.

Minister Jaishankar indicated the need for a fair and just resolution of residual issues in the aftermath of the ethnic issues is in the interest of both countries. The Indian Foreign Minister indicated that our relations should not be limited to a single issue.  He further emphasised the need for a practical conclusion of the number of projects pending implementation, indicating that it would give more confidence to New Delhi to move forward in enhancing relations. Minister Jaishankar confirmed that India is willing to work with Sri Lanka in many different ways, including enhancing people to people contacts. The Minister also highlighted the need to engage with all stakeholders, including different political parties.

Both ministers agreed on the need to conclude pending agreements to fast-track relations between the two countries.

The two Foreign Ministers are in New York for the UN General Assembly. (Colombo Gazette)