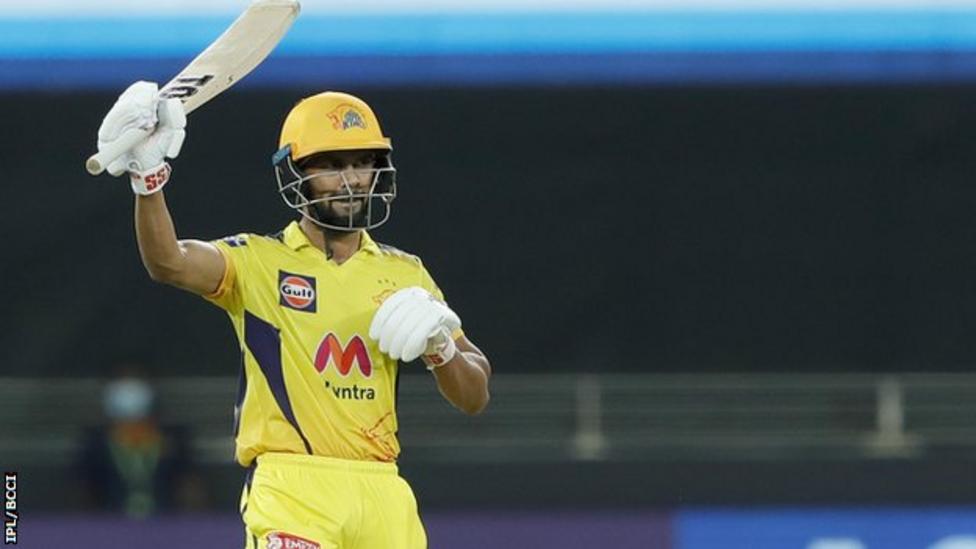 Chennai were reduced to 24-4, effectively 24-5, because of an injury to Ambati Rayudu in Dubai.

But opener Ruturaj Gaikwad batted through the innings for 88 not out from 58 balls to help them post 156-6.

CSK, captained by India legend MS Dhoni and with England all-rounder Moeen Ali in their side, join Delhi Capitals at the top of the table, having won six of their eight games.

The IPL has restarted in the United Arab Emirates having been postponed in May amid a surge of coronavirus cases in India.

Chennai are one of the IPL’s most successful teams – only five-time champions Mumbai have won more titles than the Super Kings’ three.

However, when the 2020 version of the IPL was held entirely in the UAE, Chennai struggled, finishing seventh in the eight-team table.

That struggle looked set to continue when New Zealand pace pair Trent Boult and Adam Milne shared four wickets and Milne hit Rayudu on the elbow to effectively remove half of the batting line-up inside the six-over powerplay.

But Gaikwad rebuilt in a stand of 81 with Ravindra Jadeja, who made 26, before Dwayne Bravo blasted 23 from only eight balls, including three sixes.

Gaikwad, who was crucially dropped on 19 by wicketkeeper Quinton de Kock off the spin of Rahul Chahar, ended with four maximums, as Chennai somehow recovered to post a total way beyond Mumbai.

Mumbai, winners in 2019 and 2020, have now lost half of their eight games to lie fourth in the table.

They were without influential captain Rohit Sharma because of a hamstring problem, while all-rounder Hardik Pandya was also missing.

Without Rohit at the top of the order, Mumbai lost De Kock and debutant Anmolpreet Singh to Deepak Chahar and the dangerous Ishan Kishan to Shardul Thakur.

With Moeen’s off-breaks proving economical – he conceded only 16 runs from three overs – Mumbai never found any momentum in the chase.

And although Saurabh Tiwary ended on 50 not out, Mumbai needed 24 from the final over of the match, in which Bravo picked up two wickets to cap a fine all-round performance with 3-25. (Courtesy BBC)