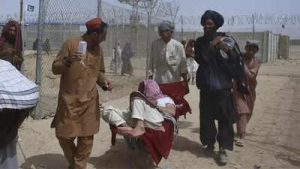 KANDAHAR: Thousands of Afghans are in trouble as they’re stranded at Spin Boldak intending to enter Pakistan after the Taliban takeover of Afghanistan.

Many Afghans with their families are stranded in the Spin Boldak district of southern Kandahar province for the past two weeks, reported Pajhwok Afghan News.

The families, mostly from the northern and eastern provinces of the country, want to leave the country after the regime change, but Pakistan forces are not allowing them to enter their country.

Currently, only those with a Pakistani ID card or a Kandahar ID card are allowed to enter Pakistan, reported Pajhwok Afghan News.

Abdul Wadud is one of the thousands of Afghans who’ve been flocking to Spin Boldak for the past week with their family of five people to Pakistan.

He came to Spin Boldak district from the northern city of Mazar-e-Sharif and said he wanted to go away the nation after the Taliban took power because he was worried about his own and his children’s future.

He said Pakistani forces and the Taliban were not allowing people to cross into Pakistan. He added that thousands of Afghans gather in front of the gate on everyday and try to enter Pakistan but they have been unable to to do, reported Pajhwok Afghan News.

Wadud said like thousands of Afghan families, he was in dire straits after running out of money and now he even could not buy food for his children.

He said many families were forced to spend the night in open fields in Spin Boldak, while many families spent days and nights in motels, hoping to move to Pakistan. According to him, people are accompanied by children, women, the elderly and the sick.

He called on the Pakistani authorities to open the border gate on humanitarian grounds and allow Afghans to enter Pakistan.

Mohammad Nasim coming from Nangarhar province told Pajhwok Afghan News he had been in Spin Boldak district for two weeks and had been stranded there. He said he arrived in Spin Boldak after the closure of the Torkham crossing. He wanted to enter Pakistan along with his family.

“Many people do not have money to spend the night. People are scared, the future is unknown, there are no jobs, people are fleeing but the roads are blocked,” he said.

Meanwhile, some stranded people stated that some families have been forced to pay between 5,000 and 6,000 rupees to smugglers to smuggle them to Pakistan, reported Pajhwok Afghan News.

The Spin Boldak commissioner told Pajhwok Afghan News that the closure of some roads in the country by Pakistan had led to more congestion on the Spin Boldak-Chaman road than ever before.

The commissioner added that the Pakistani side would only allow entry to Afghans with passports and Kandahar IDs.

He added that the Afghan side was was trying to remove the existing barrier and facilitate the movement of people.

Meanwhile, Taliban spokesman Zabihullah Mujahid told a news conference in Kabul that problems with Pakistan had increased in the country’s port areas.

He added that the number of Afghans in Spin Boldak and Torkham who wanted to go to Pakistan was higher than ever they and they were not allowed to by the Pakistani side.

According to Mujahid, the visiting delegation was concerned about jailbreaks and criminals could enter Pakistan, reported Pajhwok Afghan News. -(TimesofIndia)