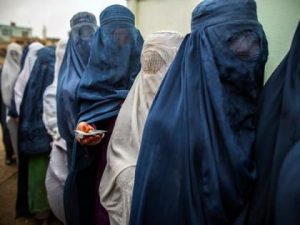 A group of women held a protest in Balkh province on Monday calling to preserve the achievements of the past 20 years and demanding women’s representation in the future government in Afghanistan.

These developments came as the Taliban is expected to form government in the near future.

The protestors expressed that Afghan women should have active participation in the government and added that “the new government will be senseless without women,” The Khaama Press reported citing protesting women.

A video posted by Tolo News also showed these women carrying placards and raising slogans demanding to include women in the government.

Earlier on Friday, Afghan women activists also staged a protest in Kabul, seeking equal rights and ensuring decision-making roles for them in political life in the country that has been taken over by the Taliban.

The Taliban on Sunday said that the new Afghanistan government is expected to be announced soon and it will be “an inclusive government.” The Taliban, which captured Kabul on August 15, has been delaying the announcement of the government formation in Afghanistan over the past few days.

While the group has not issued a statement over it yet, reports have emerged claiming that the government formation has been delayed due to differences between the Taliban and the Haqqani network over power-sharing.

Mullah Abdul Ghani Baradar, the top Taliban leader who is set to head the new Afghan regime, was injured during the clash and is currently getting treated in Pakistan. -(DailyHunt)