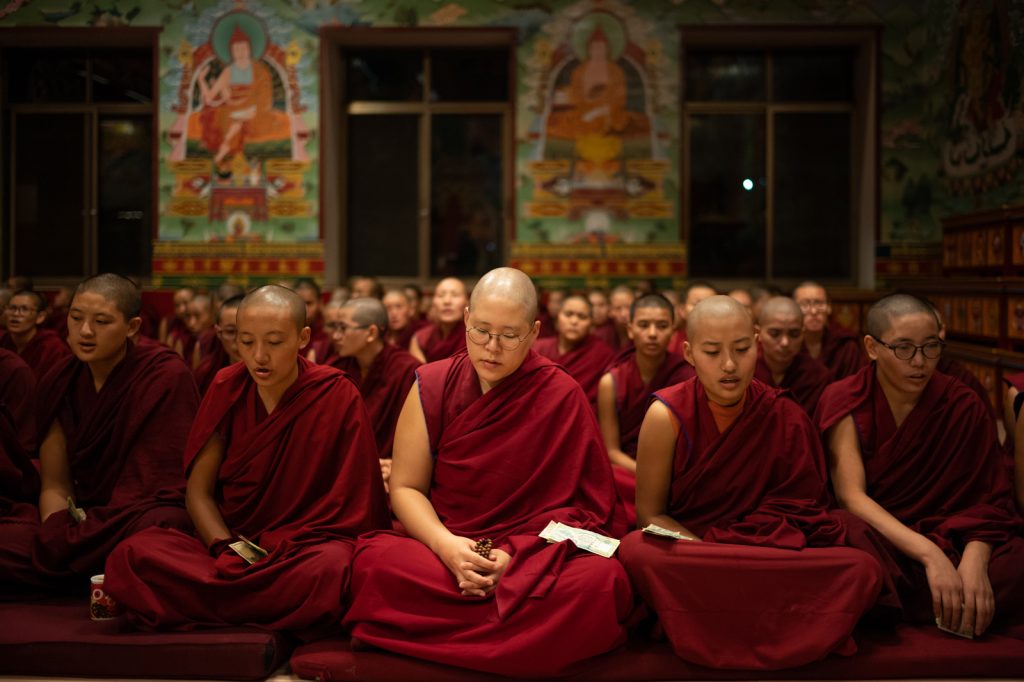 Tibetan Buddhism, branch of Vajrayana Buddhism that evolved from the 7th century CE in Tibet, also incorporates the monastic disciplines of early Theravada Buddhism and the Shamanistic features of the indigenous Tibetan religion, Bon. Characteristic of Tibetan Buddhism is the unusually large segment of the population actively engaged in religious pursuits. Buddhism was transmitted into Tibet mainly during the 7th to 10th centuries.

According to historical documents, Buddhist scriptures called treasures of wisdom were brought to Tibet by Indians Buddhists. Upon seeing that Tibetans had no idea of their significance, the Indian monks had no choice but to secret them in a safe place and return to India. Notable early teachers were the illustrious 8th-century Tantric master Padmasambhava  and the more orthodox Mahayana teacher Shantirakshita. With the arrival of the great leader teacher Atisha from India in 1042, a reform movement was initiated, and within a century the major sects of Tibetan Buddhism had emerged.

Religion has played a key part in Tibet’s culture and politics throughout its history, and continues to be central to the lives of Tibetans today. The vast majority of Tibetans practice Tibetan Buddhism and retain a deep reverence for its leader, the Dalai Lama. For China, this means religious authorities and institutions are rivals to its authority and a threat.

Buddhism is at the core of Tibetan culture, society and national identity. It is the chief source of national pride. As Goldstein wrote, “Tibetan Buddhism…exemplified for Tibetans the value and worth of their culture and way of life and the essence of their national identity. It is what they felt made their society unique and without equal.” This is why the Tibetans have always resisted foreign rulers when they were seen as threats to Tibetan Buddhism, even when they have tolerated violations of Tibetan independence or autonomy. This presents a dilemma for the Chinese, which captures Beijing’s policy dilemma: By suppressing Tibetan Buddhism, Tibetan resentment and hence the longing for freedom are increased; but by adopting a liberal policy, the very cultural system that most encourages the Tibetans to identify themselves apart from China continues to flourish.

From the Tibetan perspective, even during the more liberal era of the 1980s, the Chinese have been hostile towards Tibetan Buddhism, albeit with more subtle measures. A historical analysis shows that repressive Chinese policies in an area that the Tibetans hold so dear to their hearts would only lead to confrontation. Tibetan Buddhism under Communist China: Cycles of Repression and Resistance After 1949, when the Communist Party of China (CCP) led by Mao Zedong took over power in China and began to “liberate” the Tibetan regions, Tibetan Buddhism went through a number phases ranging from the apparent tolerance in the first few years to the most cataclysmic periods of the so-called Democratic Reforms and the Cultural Revolution to a short but intense moment of revival in the 1980s to the increasingly repressive policies beginning in the 1990s and lasting to these days.

Tibet’s exiled spiritual leader, the Dalai Lama, on March 19, 2015 led a delegation of Tibetan Buddhist monks in a historic two-day conference with a group of senior monks from Sri Lanka to discuss Vinaya, or monastic discipline, in India’s capital New Delhi. The Sri Lankan delegation included the chief prelates (Mahanayakas) of the three principal traditions of Sri Lankan Buddhism – the Ramanya, Shiyam and Amarapura Nikayas – besides members of the Asgiri Chapter and the President of the Mahabodhi Society.

Following a day-long discussion of the Vinaya, the Dalai Lama said, “We compared the Theravada and Mulasarvastivada traditions, which are the Vinaya traditions of Sri Lanka and Tibet respectively, and found no significant differences between them.”

The two sides also talked about other religious texts and the Dalai Lama said, “We are spiritual brothers following Shakyamuni Buddha, but you are the senior students. I often mention that the Chinese are senior to us in their study of the Buddha’s teachings too. However, Tibetans make up for their junior status by the depth of their study and understanding. I am convinced we can learn from each other, and this has been a good beginning.”

The Sri Lankan monks expressed a unanimous wish, shared by a large number of people in Sri Lanka, to see the Dalai Lama visit their country. The latter replied that he would not only be very happy to come but that Sri Lankan monks too should visit Indian and exchange views with Tibetan monks.

The religion suffered particularly severe measures during the Cultural Revolution, which lasted from 1966 to 1976: according to scholar Peter Dziedzic, nearly 90 percent of Tibetan Buddhist monasteries were destroyed in this period, and the population of Buddhist monks and nuns declined by 93 percent, owing to executions and imprisonment. In the years since, relations between the state and Tibetan Buddhist institutions have failed to improve, and the government continues to pursue policies limiting the religious freedoms of Tibetan Buddhists. What was left of Tibetan Buddhism after Democratic Reform had been completely destroyed by the time the Cultural Revolution ended in 1976. The death of Mao Zedong and the arrest of the Gang of Four, headed by his wife Qiang Qing, paved the way for the ascension of Deng Xiaoping as the paramount leader of China in 1977. Deng initiated a series of economic and political reforms in China, which also led to a period of political liberalization in Tibet but religious freedom had its limitations.

The CCP abandoned the Cultural Revolution-era policy of violent assimilation and returned to the traditional Chinese belief that the frontier-barbarians would voluntarily adopt the ‘superior’ and ‘advanced’ culture of the Chinese. This was also compatible with the Marxist idea of the eventual withering away of national and religious identities in favour of proletarian identity in the course of revolution. However, conditions should be created conducive for such a process of ‘acculturation’ to work even if that meant giving ground temporarily. This opened up little space for the revival of Buddhism and other aspects of Tibetan culture.

Because of their status as community leaders and their experience of persecution by China, monks and nuns have consistently been at the forefront of resistance to China’s rule, defending Tibetan language and culture, planning and leading protests, educating Tibetans about the social and environmental impacts of the occupation and in sending information about Tibet to the outside world. The role of monks and nuns in Tibet’s resistance is remarkable and historical and as a result, monks, nuns and other religious figures have been continuous targets for surveillance, persecution, violence and propaganda by the Communis rulers.

In January 2018, Human Rights Watch reported that Chinese government officials were coordinating a “takeover” of the important Tibetan Buddhist monastery at Larung Gar. In a move to assert greater control and bolster its surveillance of religious activities, the government reduced the size of the monastic settlement, demolished a number of monastery buildings, and placed atheist Communist party officials in important administrative positions. The government claims that the goal of their program was the “reconstruction” of old buildings to ensure their compliance with safety standards. After decades of tensions between the Chinese government and Tibet, however, the move appears to more closely align with a long history of religious restrictions targeting the practice and institutions of Tibetan Buddhism.