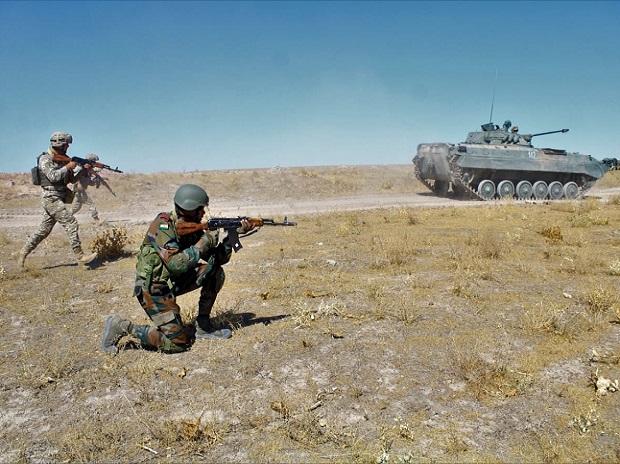 India and Kazakhstan carried out the 5th edition of the annual bilateral joint exercise KAZIND-21 strengthing military diplomacy between the two countries.

“Troops of India and Kazakhstan carrying out the demonstration of a raid on a terrorist hideout during the joint military exercise KAZIND-21 at Training Node Aisha Bibi, Kazakhstan,” tweeted Indian Army.

As part of military diplomacy and to strengthen the growing strategic relation with Kazakhstan, the 5th “KAZIND-21” is conducted in Kazakhstan from August 30 to September 11.

The exercise is a joint training between both the Armies, which will boost the bilateral relations between India and Kazakhstan.

The Exercise will provide an opportunity to the Armed Forces of India and Kazakhstan to train for Counter Insurgency/ Counter-Terrorism operations in the mountainous, rural scenarios under UN mandate, read a release by the Ministry of Defence.

The scope of Joint Exercise includes professional exchange, planning & execution of the operation in counterterrorism environment at sub-unit level and sharing expertise on skills at arms, combat shooting and experiences in Counter Insurgency/ Counter-Terrorism operations.

The exercise will culminate after a 48-hour-long validation exercise which will involve a scenario of neutralisation of terrorists in a semi-rural hideout. It will strengthen mutual confidence, interoperability and enable sharing of best practices between the Armed Forces of India and Kazakhstan. (ANI)