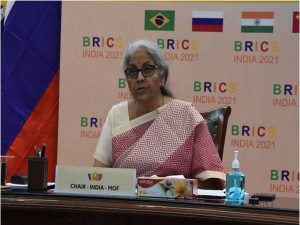 As per an official release of the Ministry of Finance, the meeting was scheduled ahead of the BRICS Leaders’ Summit 2021 to discuss and finalize key outcomes of the BRICS finance agenda this year. Finance Ministers and Central Bank Governors of Brazil, Russia, China and South Africa were in attendance.

The Ministry said that Finance Minister discussed with her BRICS counterparts the key areas of intra-BRICS cooperation that would be crucial in supporting the recovery of BRICS economies and maintaining macroeconomic stability while protecting against future uncertainties and risks.

Sitharaman also highlighted that BRICS has been playing and will continue to play a crucial role in dealing with crises such as the COVID-19 pandemic.

“During the meeting, the FMCBGs endorsed the BRICS Finance Ministers and Central Bank Governors Statement on Global Economic Outlook and Responding to COVID-19 Crisis with an annexure on snapshot of policy experiences of BRICS in dealing with the economic impact of the pandemic,” said the release.

“Sitharaman, as the chair, remarked that India attaches great significance to presenting this Statement before the global community since it unanimously voices the view of BRICS countries on the critical aspects underpinning current international policy conversations on post-pandemic recovery,” it added.

A “Technical Report on Social Infrastructure: Financing and Use of Digital Technologies” was also endorsed in the meeting, the Ministry informed.

“This report is a unique exercise towards collaborative knowledge sharing between BRICS economies on social infrastructure, including on how BRICS governments have leveraged digital technologies to enhance access and improve service delivery, especially in the health and education sectors,” the release stated.

The Finance Ministry informed that the BRICS Finance Ministers also welcomed the conclusion of negotiations on the text of Cooperation and Mutual Administrative Assistance (CMAA) in Customs matters, along with deliberating progress made on other custom related matters.

“Sitharaman and Das appreciated the BRICS members for their cooperation and support to the Indian Chair in preparation as well as the finalization of the significant and relevant deliverables of BRICS Finance,” the release added. -(ANI)