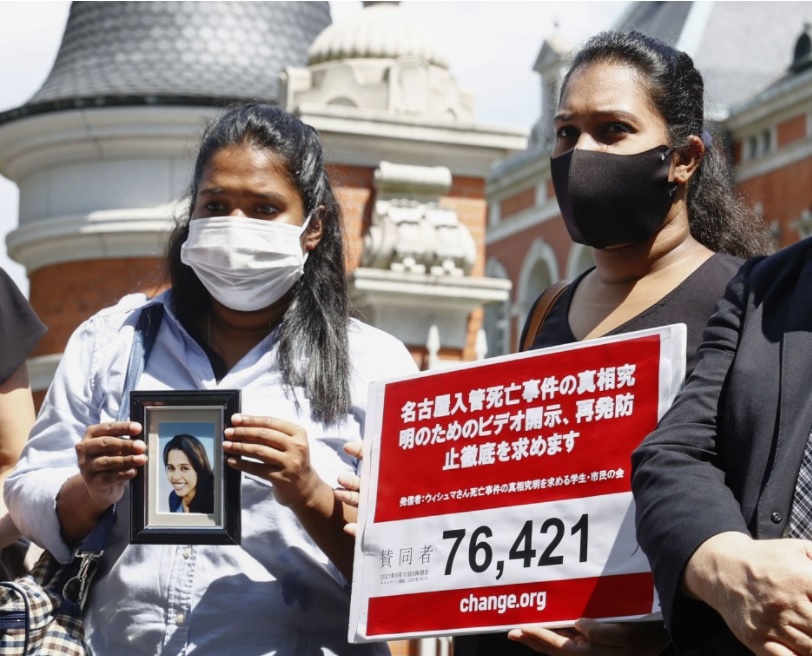 The family of a Sri Lankan woman who died in March following mistreatment at a Japanese immigration center, visited the immigration agency today (Friday) to seek full disclosure of two weeks’ worth of a security camera footage of her final days.

The family members of Ratnayake Liyanage Wishma Sandamali, 33, were only able to see about half of a two-hour edited version of the footage in August due to its shocking content. They also demanded the Immigration Services Agency of Japan accept the attendance of their lawyer while they watch it.

The immigration agency was prepared to show the remaining footage to the family on Friday, but they refused to watch it as their request to be accompanied by their lawyer was turned down.

Wishma’s younger sister Wayomi, 28, said the response of the agency was regrettable.

Shoichi Ibusuki, the lawyer for the family, said the agency had medical staff on call in case they were to feel unwell watching the video but did not allow his attendance.

“The agency does not understand the feelings of the bereaved family,” he said.

After seeing the video for the first time on Aug. 12, the younger sisters of Wishma said their sibling had been treated “like a dog.”

Selected parts of the video showing the last days of Wishma, who died on March 6 while in custody, included scenes of her talking with other detainees and being mocked by immigration officers, the family said.

Wishma was taken to the Nagoya Regional Immigration Services Bureau in central Japan in August 2020 after it was found her visa had expired. She had complained of stomach pain and other symptoms from mid-January and applied for provisional release for hospital treatment, but was refused.

Wishma’s other younger sister Poornima said at a press conference in August that Wishma “could have been cured if they had hospitalized her temporarily.”

Wayomi said, “Our sister was murdered. Anyone could see that her condition was deteriorating. She was not treated like a human being. We want to see the whole video, not just a part of it.”

The agency’s final report on the death of Wishma released in August said the Nagoya immigration facility failed to provide appropriate medical care for her, though the probe could not determine the cause of her death.

The agency had at first refused to disclose the footage to the family, citing security, but changed its policy after facing criticism.

An online petition launched by Wishma’s family and supporters in July to press the government to release the full video footage collected over 50,000 signatures and was handed to an agency official the following month. The petition is ongoing and the supporters plan to submit additional signatures.

As of Friday afternoon, more than 76,000 people had signed the petition.

A university graduate and English teacher in her home country, Wishma entered Japan in June 2017 on a student visa planning to teach English to children, according to her family, supporters and the Justice Ministry. (Courtesy Kyodo News)