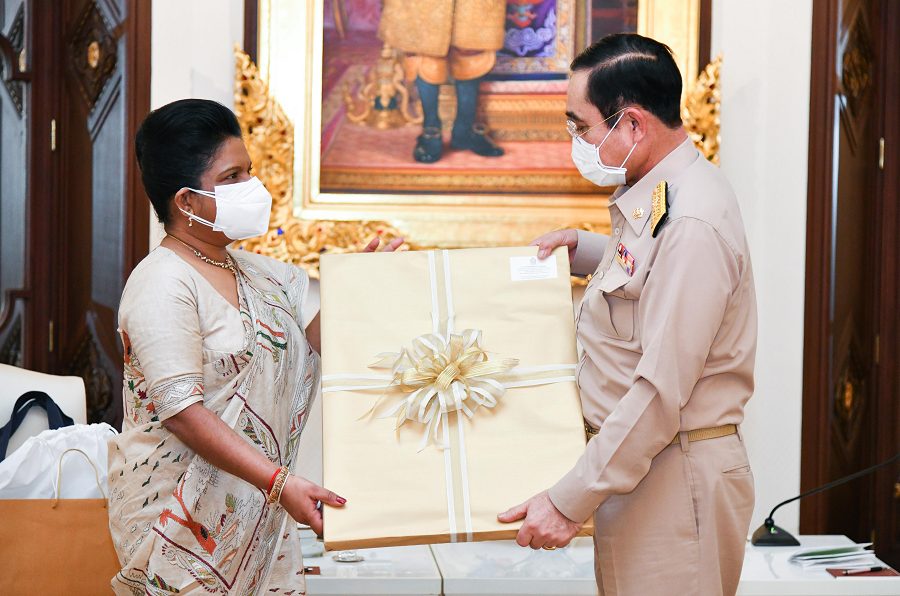 Prime Minister and Minister of Defense of the Kingdom Thailand, General Prayut Chan-o-cha is to look at the opportunities available at the Colombo Port City.

The Ambassador to the Kingdom of Thailand and Permanent Representative of Sri Lanka to United Nations Economic and Social Commission for Asia and the Pacific (UNESCAP) C.A. Chaminda I. Colonne paid her very first courtesy call on the Prime Minister and Minister of Defense of the Kingdom Thailand General Prayut Chan-o-cha at the Government House in Bangkok.

Both recalled longstanding excellent bonds of friendship and cooperation between two countries for many centuries and deeply rooted in the Theravada Buddhist traditions. Prime Minister General Prayut Chan-o-cha conveyed great affection towards the Government and People of Sri Lanka.

Emphasizing on enhanced cooperation between Sri Lanka and Thailand in the fields of export, investment, especially in the context of new normal, Prime Minister General Prayut Chan-o-cha emphasized the need for accelerating negotiations on bilateral Free Trade Agreement (FTA). Both assured to strengthen bilateral economic and trade ties leading to increase trade volume and to enhance investment with a win-win approach. Ambassador Colonne invited Thai investors to invest at the Colombo Port City and on her request Prime Minister General Prayut directed the Board of Investment of Thailand to conduct virtual meeting with the Colombo Port Commission and Sri Lanka Board of Investment.

While highlighting her intention of promoting economic diplomacy with the Government of Thailand, especially in the ten areas identified under the Strategic Economic Partnership (SEP) and ‘One Village one Product’(OVOP) concept in Sri Lanka, Ambassador Colonne assured strong commitment during her tenure of office for consolidating Sri Lanka-Thai bilateral relations for mutual benefit.