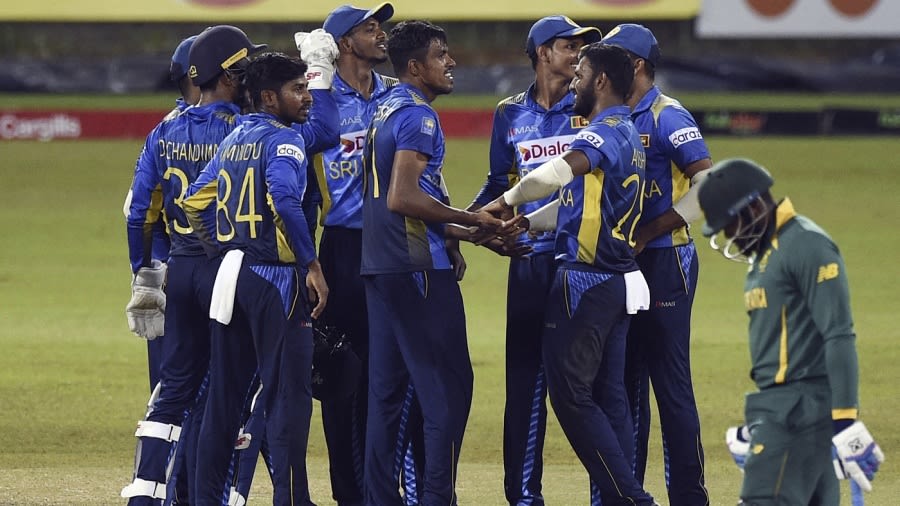 On by far the most spin-friendly surface seen in this series, Sri Lanka’s inexperienced spin attack bamboozled South Africa, leading the hosts to 78-run victory that sealed Sri Lanka’s first ODI series win since February 2020.
Maheesh Theekshana, the 21-year-old allsorts right-arm spinner, was a revelation. He took 4 for 37 , which is a record for a Sri Lanka spinner on debut. South Africa’s batters struggled to pick his carrom balls, and even had trouble facing his stock offbreaks. Legspinner Wanindu Hasaranga was almost as effective, claiming 2 for 32, while left-arm spinner Praveen Jayawickrama was the catalyst for South Africa’s collapse, having Aiden Markram caught at slip in the second over.
With seamer Dushmantha Chameera also contributing two wickets in his new-ball spell, Sri Lanka decked South Africa for 125 in 30 overs. They had essentially won the game in the first 15.2 overs of the chase, when they had reduced the visitors to 54 for 6.
South Africa’s spinners had also been good, in the first innings. Keshav Maharaj collected 3 for 38, while Tabraiz Shamsi and George Linde took two apiece, and even the part-time offspin of Aiden Markram accounted for one wicket. In fact, all those bowlers delivered their full quota of overs, which meant that the seamers were left with only 10 overs, as they restricted Sri Lanka to 203 for 9.
In the end, Sri Lanka’s attack were a little more ruthless. Although Jayawickrama provided the first wicket, Chameera’s removal of Reeza Hendricks and Rassie van der Dussen in quick succession placed immense pressure on South Africa’s middle order. This was after Chameera had also contributed 29 vital runs from the No. 9 position. There were only occasional lapses in the field for Sri Lanka, but these were outweighed by bits of brilliance – the most sparkling of which was Kamindu Mendis’ low, diving catch at short midwicket to dismiss van der Dussen.
In the end, no one in the South Africa side crossed 25. In fact, the entire match did not have even a single half-centurion – Charith Asalanka coming closest with his 47 off 71 balls.
Theekshana’s was a dream debut from the very first ball he delivered. Floating one wide of Janneman Malan – who had hit a hundred in the last game – Theekshana tempted the batter into a loose drive, and had him caught at slip, where Dhananjaya de Silva held on to the second of his three excellent catches of the evening (he had previously dived to his left to snaffle an edge from Markram, and later forward to cling to an edge off the bat of Kagiso Rabada, which had been deflected off the wicketkeeper’s thigh). Later, Theekshana trapped Heinrich Klaasen lbw with a carrom ball that the batter misread, before dismissing Rabada for his third, then closing out the match by having Maharaj caught behind.
Although occasionally wayward, thanks in part to the moisture on the ball after rain had stopped play for around 40 minutes during South Africa’s first powerplay, Theekshana was menacing right throughout his ten overs. Hasaranga bowled beautifully from the other end, bowling Wiaan Mulder through the gate with a perfectly-pitched googly, and later having Linde caught at deep midwicket.
Sri Lanka’s own innings had been stuttering. South Africa’s two left-arm fingerspinners – Maharaj and Linde – had the openers lbw inside the first seven overs. There were attempts at rebuilding, from the likes of Kamindu Mendis, de Silva, and Asalanka, but South Africa continued to strike, never allowing a partnership to really bed down. Asalanka, who hit only two fours in his 71-ball stay, accumulated by playing risk-free cricket, but on a surface such as this, even that approach was fraught with danger. He was eventually adjudged caught behind off Shamsi, that decision informed by very thin snicko evidence.
With their spinners taking wickets so regularly, South Africa had Sri Lanka at 166 for 8 at one stage, which is when Chameera produced his innings, which was forged of equal parts luck and willpower. At the time, 203 for 9 did not seem a particularly daunting score. But Sri Lanka’s variety, their excellent fielding, and a deteriorating pitch made it seem a much greater target. (Courtesy ESPN Cricinfo)
Post Views: 303