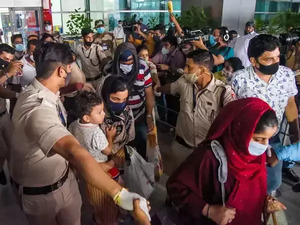 The government has eased visa restrictions for Afghan nationals by making the proof of occupation and proof of residence “optional”, said officials. They said the decision was taken to help a large number of people leaving Afghanistan in the wake of the Taliban takeover of the country.

Several Afghan nationals applying for the e-visa have lost their identity documents. It is estimated that more than 100,000 Afghans have sought emergency visas but only a few have been granted. The new e-Emergency X-Misc Visa was introduced by the Ministry of Home Affairs (MHA) while adhering to the security protocols, which involve vetting of these proposals by government agencies in Delhi.

The national identity card of Afghanistan, Tazkira, continues to be mandatory while applying for e-visa, said officials. As per an earlier order, visas for Afghan nationals were under the prior referral category (PRC). However, Afghan nationals were not covered under the electronic visa category and had to physically present themselves at the embassy to get the visa.

“Due to the rapidly changing situation in Afghanistan, the evacuation process has become complex. The visas are being issued only after security clearance and Afghan nationals on any kind of security watch-list have been denied entry even if they came on diplomatic passports,” said a senior home ministry official, who did not wish to be identified.

Officials said it was an unintended mistake to stop Kargar as there was “panic” after reports that some passports with Indian visas had been taken away by the Taliban. Citing security threats, the MHA on Wednesday cancelled all the previous visas issued to Afghans and said it is mandatory to obtain e-visas.

The ministry said that due to the prevailing security situation in Afghanistan and streamlining of the visa process only e-visas would be accepted for entry. All visas previously issued to Afghan nationals, who are not currently in India, stood “invalidated with immediate effect”, the ministry said, taking note of reports that passports of Afghan nationals had been misplaced.

Ever since the fall of Kabul on August 15, the Indian government has reiterated it would accept those fleeing Taliban rule, with priority being given to Sikh and Hindu refugees. The visa will be valid for a period of six months. Meanwhile, external affairs ministry spokesman Arindam Bagchi said on Friday that evacuations are ongoing amid the security threat in Kabul. It is understood that some Indians are still stranded there and efforts are being made to evacuate them.

He said India has evacuated more than 550 people on six flights through Kabul or via Dushanbe — 260 Indian embassy officials and other personnel, and the rest Afghans and other officials. Asked about the people left to be evacuated from Afghanistan, Bagchi said the vast majority of Indians who sought to come back had done so, adding that those who remained — a number that kept changing with requests coming in — would be brought back soon.

On being asked whether Afghan nationals being evacuated to India would be given a ‘refugee’ status, Bagchi said that for now they were being kept on emergency visa, which would be valid for six months. He said the situation would be assessed after the time period due to its evolving nature. -(The Economic Times)