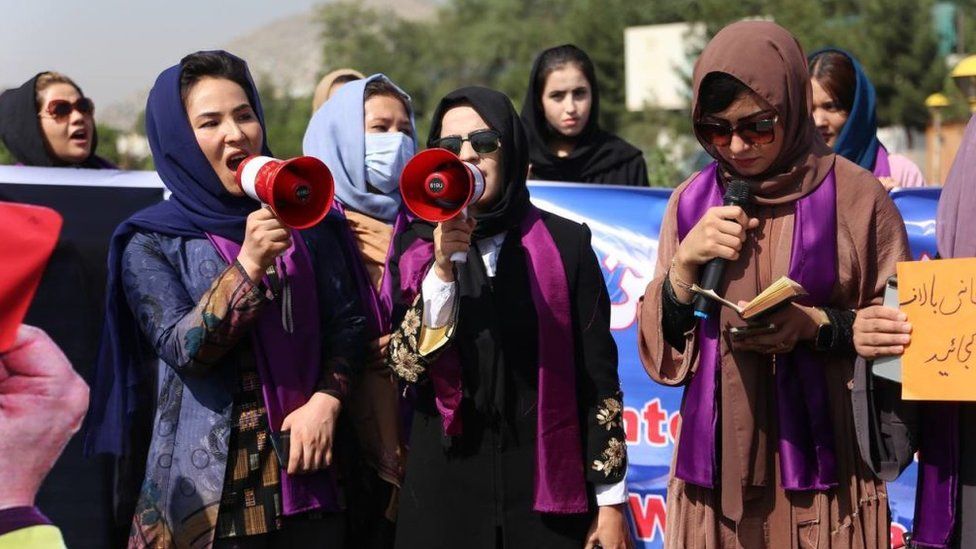 Taliban officials have broken up a demonstration by dozens of women in Kabul demanding rights following the Taliban takeover in Afghanistan.

The group say the Taliban targeted them with tear gas and pepper spray as they tried to walk from a bridge to the presidential palace.

But the Taliban maintain the protest got out of control, according to Afghan media outlet Tolo News.

It’s the latest of several protests by women in Kabul and Herat.

The women were calling for the right to work and to be included in the government. The Taliban say they will announce the make-up of their administration in the coming days.

The Taliban have said women can be involved in government, but not hold ministerial positions.

Many women fear a return to the way they were treated when the Taliban were previously in power, between 1996 and 2001. Women were forced to cover their faces outside, and harsh punishments were meted out for minor transgressions.

“Twenty-five years ago, when the Taliban came, they prevented me from going to school,” journalist Azita Nazimi told Tolo.

“After five years of their rule, I studied for 25 years and worked hard. For the sake of our better future, we will not allow this to happen.”

Another demonstrator, Soraya, told Reuters: “They also hit women on the head with a gun magazine, and the women became bloody.”

On Saturday, US General Mark Milley questioned whether the Taliban would be able to transition from an insurgent force to a government, saying there was a “good probability” of civil war.

“That will then in turn lead to conditions that could, in fact, lead to a reconstitution of Al-Qaeda or a growth of Isis [Islamic State group],” he told Fox News.

Meanwhile the UK’s Head of the Armed Forces, General Sir Nick Carter, defended military intelligence over criticism it failed to predict the Taliban’s advance, saying even the Taliban themselves were surprised at how easily they took control.

He told the BBC “a lot of money changed hands as they managed to buy off those who might have fought for them”.

Clashes have continued over the weekend in the Panjshir Valley, north of Kabul, where resistance fighters have been thwarting efforts by the Taliban to exert control.

But there’s been claim and counter-claim. The Taliban maintain they’ve taken control of two more districts and are heading for the centre of the province.

A spokesman for the National Resistance Front of Afghanistan (NRF) said heavy fighting was continuing and thousands of Taliban had been surrounded.

The Panjshir Valley, home to between 150,000 and 200,000 people, was a centre of resistance when Afghanistan was under Soviet occupation in the 1980s and during the Taliban’s previous period of rule.

None of the claims by the NRF or the Taliban could be independently verified.