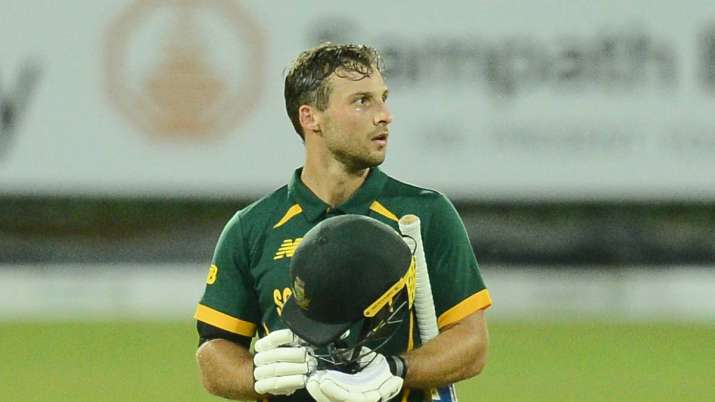 Shamsi took the wind out of the hosts’ sails with wickets in the middle overs as the South African came up with figures of 5/49 as Sri Lanka were bundled out for 197 in 36.4 overs, chasing a revised target of 265 from 41 overs under D/L Method on Saturday night.

Earlier, the start of the match was delayed due to rain by an hour and a half. South Africa’s stand-in captain, Keshav Maharaj, won the toss and elected to bat with left-arm spinner George Linde making his ODI debut for the visitors.

South Africa got off to a good start with openers Aiden Markram and Malan sharing a 43-run stand before Chamika Karunaratne snared the former’s wicket in his first over. Malan was then joined at the crease by No.3 batsman, Reeza Hendricks, and together the duo steadied the proceedings. They helped South Africa cross 100 in the 20th over.

Shortly after, Malan brought up his third ODI fifty in style with a four off Praveen Jayawickrama. Hendricks, too, reached his third fifty in the format in 52 balls. The 96-run stand was broken by Dhananjaya de Silva, who bowled Hendricks out for 51. Malan was then joined by Rassie van der Dussen.

Van der Dussen didn’t last long as he was dismissed by Hasaranga de Silva for 16. But that dismissal meant it was Heinrich Klaasen coming in to bat at No.5. With Klaasen firing from one end, Malan, too, kept notching up runs and reached the triple-digit mark — his third ODI ton — in 126 balls. Malan, who was struggling with cramps, went big in the very next over, smashing Hasaranga for a 4, 6 and 4, on three consecutive deliveries.

In reply, the hosts had the worst possible start as they lost three wickets in the span of five deliveries. Kagiso Rabada got the back-to-back scalps of Avishka Fernando and Bhanuka Rajapaksa for 8 and 0 respectively. Wiaan Mulder then scalped Minod Bhanuka for three leaving the Lankans reeling 19/3 and a long way away from the chase. Dhananjaya de Silva too couldn’t contribute much, with Tabraiz Shamsi getting into the act, dismissing him for 12.

Rain halted the game with the Lankans still requiring 170 runs in 22 overs, being 41 runs behind the total on the DLS method. With the contest revised again to 41 overs and Sri Lanka requiring a revised target of 265 to win, Tabraiz Shamsi finished things off for the visitors, ending with figures of 5/49, as the Proteas levelled the series 1-1, with a 67 run victory (DLS method).