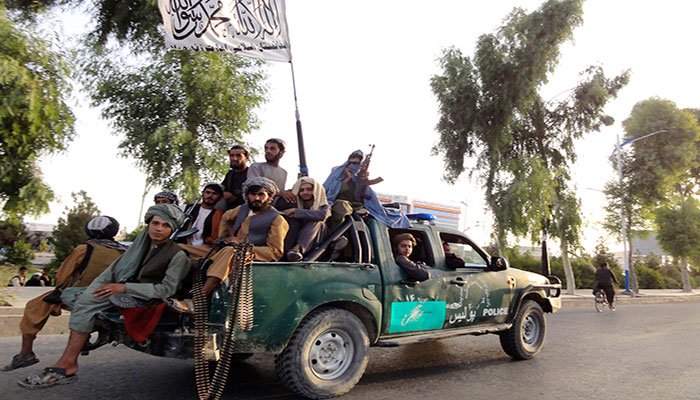 Amid rumors about the whereabouts of Taliban Amir Haibatullah Akhundzada and the future government formation, the life in Kabul is still engulfed in uncertainty as the government offices are not fully functioning yet.

The government employees are mostly away from their offices; some of them are trying to flee abroad and some are waiting for the establishment of the new Taliban government. On the other hand, the armed Taliban are moving on the roads in government vehicles along with their flags.

Since August 15, the day Kabul fell, the capital has been witnessing many developments, the most important one at the Hamid Karzai International Airport. Thousands of Afghan men, women and children have gathered in front of the airport and spending nights in the streets and footpaths in the area.

The moment you enter the Maidan Road, also known as the Airport Road, you would find armed Taliban almost everywhere. Whenever you would bring out your camera, they would shout at you and when you would introduce yourself as a journalist, they would ask you not to film. Still some individuals would secretly take their chances, but if you are caught, they would ensure that all the footage is deleted.

A group of Taliban is holding the main roundabout; some are sitting and busy with the phones and others are discussing their duties and also dealing with people who have the courage to come near them.

Outer security of the airport is controlled by the armed Taliban as they occupy the main centre of the roundabout with a couple of security vehicles with the Islamic Emirates of Taliban flags. In this area, when you hear the shots, it means this is an attempt to control the mob coming towards the airport.

“Yes, what you want,” an armed Taliban wearing Shalwar Kameez and holding a rocket propelled grenade (RPG) asked me when I approached him. “I am told that I cannot take footage and people say that I need to have permission from you,” I informed him about my purpose of coming to his spot. A young Taliban, apparently in his mid-20s, told me politely: “We consider this a war zone as our enemy can take advantage of this, so filming here is strictly prohibited. We haven’t allowed anyone, it’s better you should leave.” I left and then started finding someone who could talk to me.

“Sir, I am a Hazara from Lughman (a village of Badaghshan province), we have reached here only two days ago and spending nights on the footpath, I want to take my family abroad,” a middle aged man with his three children and wife approached me, thinking I was registering families for abroad. Neither he had a passport nor visa but only hope to board a plane. He was here after hearing that the Western countries were taking Afghans abroad. I asked where he wanted to go. He said, “I don’t know, I just want to leave Afghanistan.” I asked why? “I fear the new system,” he replied carefully.

While I was talking to him, a young girl wearing a burqa came to us and spoke in local Dari language and showed five fingers of her palm. “We are five sisters with a brother; we all want to leave too,” she said. They too did not have the passports and visas. Suddenly, the Taliban came there and asked everyone, including me, to leave the premises. I left, realising that the situation here is tricky as many people here are merely listening to rumors. Most of the people at the airport have similar stories to tell while a few also have passports and visas but due to the rush the Taliban would not let them enter the airport.

When the mob would become uncontrolled, the Taliban would fire in the air, following which you would see families, including women and children, running with fear. Away from the airport, there is a large majority of people still living in the city with the hope that normalcy would come at some point. Here some of the Taliban are also wearing the army uniforms and carrying gear.

Away from the airport, there is one more place where you would find a flood of people and this is the gate of the Canadian Embassy located at the Wazir Akbar Road at Shaher-e-Naw. Here too, you would find people attempting to get visas to leave Afghanistan.

Apart from this, the overall security of the city is better. I used a taxi to travel here and there and my taxi driver would share, “Now we don’t have any fear of theft in the city, we feel more secure under the Taliban rule.”

The Taliban are present almost on every key point of the city, while police are practically not visible. However, the big business centres are not yet opened and only small shops and restaurants are working.

The traffic in the city is now being controlled by the Taliban and a few traffic wardens are already working in the department, but their number is visibly low. Same is the situation with other government and private businesses, where low number of people are working. People in the streets also complained about the price hike, which they are facing with increase of more than 100 per cent in petrol prices, from 30 Afghanis per litre to almost 72 Afghanis.

The city of Kabul is surrounded by the mountains, where till August 15, the big Afghan flags were placed but now there are no flags. “The Afghan flag is our unanimous flag, there is no difference on this, so we request the Taliban not to change it,” Shamas, a young Afghan student, told this reporter. I asked if he was happy, he avoided the answer, saying, “I would just talk about my national flag”. (The News)