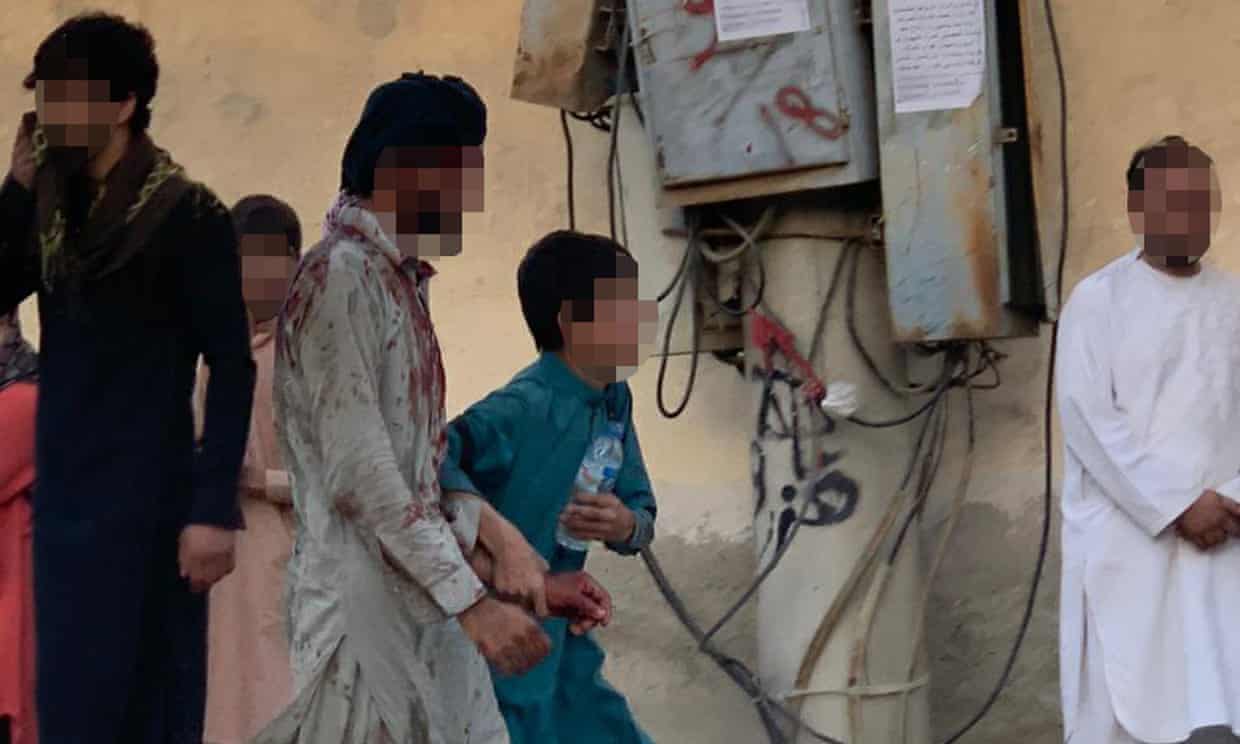 Two powerful suicide bombs have hit one of the main entrances to Kabul’s international airport, killing 13 people and reportedly injuring as many as five US soldiers just hours after western intelligence agencies warned of an imminent and “very credible” terrorist threat.

Confirming US casualties, a Pentagon official described a “complex attack” that appeared to have involved one suicide bombing close to the Abbey gate entrance to the airfield with the second occurring near the Baron hotel which has been used to process Afghans hoping to come to the UK. The UK Ministry of Defence said there were no UK military or civilian casualties.

The explosion took place amid frantic crowds of Afghans outside the airport who have gathered daily in the hope of escaping via the chaotic airlift which the United States says will end by Tuesday.

Images shared on social media showed bloodied casualties being ferried from the scene of the blast, some of them in wheelbarrows to waiting ambulances.

“We can confirm that the explosion at the Abbey gate was the result of a complex attack that resulted in a number of US and civilian casualties,” John Kirby, the Pentagon press secretary, said in a post on Twitter. “We can also confirm at least one other explosion at or near the Baron hotel, a short distance from Abbey gate.”

According to a Taliban spokesperson the attack killed at least 13 people, including children, with Taliban guards among the wounded. One emergency hospital in Kabul said it had received 30 wounded with six dying on the way to hospital.

British and Turkish military sources confirmed that the attack had involved two blasts, with US officials later stating that the believed that Islamic State’s affiliate in Afghanistan – known as the “Khorasan province” an enemy of both the west and Taliban – was responsible.

One eyewitness described the moment of the blast to the New York Times. “The crowd was packed and people were pushing,” said Barat. “I tripped and that’s when the explosion happened. I think four or five soldiers were hit. We fell to the ground and the foreign soldiers started shooting. There were bodies everywhere, people were running.”

Commenting on news of the explosion a Downing Street spokesperson said: “The prime minister has been updated on the situation at the airport in Kabul and will chair a COBR later this afternoon.”

Adam Khan, an Afghan waiting outside the airport, said the explosion went off in a crowd of people waiting to enter the airport.

Khan, who said he was standing about 30 metres away, said several people appeared to have been killed or wounded, including some who lost body parts.

The warning of an attack had been delivered by several countries including the UK. Afghans gathering to try to gain access to Kabul’s Hamid Karzai international airport were told to leave immediately and move to a safe place, even as the evacuation appeared to be rapidly coming to an end.

Reacting to the news the French president, Emmanuel Macron, who is visiting Ireland, said the security situation had profoundly deteriorated and that the French ambassador would not remain.

“We are facing an extremely tense situation,” Macron told a joint news conference with the Irish prime minister Micheál Martin.

James Heappey, the UK armed forces minister, had earlier said Afghans trying to flee for the UK should not head to the airport owing to the “very, very credible reporting of an imminent attack”.

The warnings over the previous 24 hours were specific. “Those at the Abbey gate, east gate or north gate now should leave immediately,” the US state department said, citing unspecified “security threats”. It advised people to approach only if “you receive individual instructions from a US government representative to do so”.

The final US troops will depart by next Tuesday, 31 August, and UK troops are expected to do so slightly earlier.

A number of countries issued statements saying they were ending their involvement in the airlift on Thursday, including Canada, Germany, the Netherlands, Belgium and Hungary.

Confirming that Canada had ended its evacuation flights, Gen Wayne Eyre, the country’s acting chief of defence staff, said the last evacuation plane had left and the vast majority of Canadian personnel were gone.

“We stayed in Afghanistan for as long as we could. We were amongst the last to cease evacuation operations. We wish we could have stayed longer and rescued everyone who was so desperate to leave. That we could not is truly heartbreaking, but the circumstances on the ground rapidly deteriorated,” Eyre said.

France said its flights would end on Friday. The prime minister, Jean Castex, told the French broadcaster RTL: “From tomorrow evening onwards, we are not able to evacuate people from the Kabul airport.”

Earlier the Guardian revealed that the UK defence secretary, Ben Wallace, had said some people were better off trying to escape via a land border to a neighbouring third country, and the Foreign Office changed its advice to urge people near Kabul airport to “move away to a safe location” due to the “ongoing and high threat of terrorist attack”.

However, crowds of people were still queueing at the airport in the hope of making it on to one of the last remaining evacuation flights by the UK and other Nato countries. According to estimates in the US media on Thursday some 250,000 Afghans with links to the US were in danger of being left under Taliban rule.

“I will wait until the airport is closed,” said a man who identified himself only as Hamid, adding he was a manager in a state ministry until 11 days ago when the Taliban rolled into Kabul.

“They will give our jobs to their relatives. How will I support my family?” he said, accompanied by his wife, ageing father-in-law and two young children.

Heappey said a group known as Isis-K (Islamic State Khorasan province) were aware of the limited window of time left and would want to strike with what they regarded as a “spectacular” attack that the west would view as “abhorrent”.

“We’re not being overly cautious,” Heappey told the BBC, adding there was a “very, very real threat.” (Courtesy The Guardian)