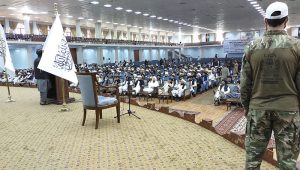 Lahore: Indian Army officials have warned that American weapons seized by Talibans from the Afghanistan Army will be first used to create havoc in Pakistan before they are smuggled to India, media reports said.

The Pakistan Army and terrorist groups supported by it are getting huge supplies of these weapons after the Afghan Army surrendered before the Taliban and gave away all its weaponry, reports India Today.

“The way the ISI-backed terrorist groups in Pakistan have been strengthened by the Taliban victory in Afghanistan, it is most likely that the weapons would be first used for violence within Pakistan itself before they reach India,” top Army sources told India Today TV.

According to reports, over five lakh M-16 and M-4 assault rifles along with the American Light Machine Guns and 50 calibre weapons on the armoured vehicles have been looted by Taliban insurgents who recently overran Afghanistan and are on the way to form a government in the country.

The arms cache also includes a huge number of sniper rifles along with steel core bullets, bulletproof vests and armoured piercing rounds. Apart from the small arms, inputs suggest that Pakistan is also likely to get control of some of the 2,000 armoured vehicles, including Humvees, 40 aircraft including the UH-60 Black Hawks, attack helicopters and ScanEagle small drones, the Indian news channel reported.

Meanwhile, sources told India Today that if the Pakistan Army tried to cushion the Afghan Taliban into the Indian areas they would be dealt in the same way they were dealt with in the 1990s. -(IndiaBlooms)