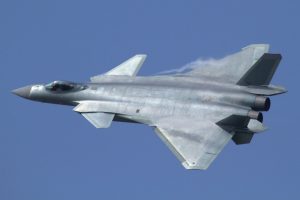 While the dragon may be a symbol of China, its actual Mighty Dragon appears to be born of western innovation!

by Peter Suciu
Here’s What You Need to Remember: It would be a tremendous coincidence that the J-20’s development began in earnest only after the F-22 was unveiled, yet some of the technology on the Chinese fighter has been described as looking “awfully similar” to systems on the Lockheed Martin F-35 Lightning II Joint Strike Fighter.

There is an old saying, “good artists borrow, great artists steal” and while it isn’t actually a Chinese proverb, there is no denying that Beijing has taken it to heart especially where military hardware is involved. In the spring of 2019, the Pentagon accused China of using “cyber theft” and other methods to bolster its military.

China’s efforts to build a world class military certainly have not come just from domestic research and development (R&D) efforts, but rather from stealing from foreign powers. Even Russia has expressed frustration that China has so brazenly “borrowed” technological innovations as Beijing rolls out ever more advanced military hardware.

This is evident in the J-20 “Mighty Dragon” fighter, which was almost certainly based on stolen designs from the United State Air Force’s Lockheed Martin F-22 Raptor. As Business Insider had previously reported, the appearance and profile of the aircraft is far from the only similarities between the two fifth-generation fighters.

It would be a tremendous coincidence that the J-20’s development began in earnest only after the F-22 was unveiled, yet some of the technology on the Chinese fighter has been described as looking “awfully similar” to systems on the Lockheed Martin F-35 Lightning II Joint Strike Fighter. It would be suspicious enough if the Chinese fighter merely resembled the F-22, but the fact that its sensor system is so close in design to the Lockheed Martin Electro-Optical Targeting System found on the Lightning II surely suggests that espionage played some role in the Mighty Dragon’s development.

This isn’t just speculation either.

In fact, in 2007 Lockheed Martin had found that Chinese hackers had been stealing technical documents related to the F-35 program, while a similar theft occurred when hackers working for Beijing breached a network of an Australian F-35 sub-contractor, the Asia Times reported. Based on those breaches, it seems likely that the Chinese had acquired crucial information and technological data that has been utilized in production of the J-20.

Despite the fact that China gained valuable insight from the west, which certainly aided in the development of its advanced aircraft—it has also kept its cards close to the chest, revealing little details about the capability of the fifth-generation fighter. It is believed the J-20 is capable of reaching a maximum speed close to Mach 2 (1,535 mph) and has a ceiling of around 60,000 feet along with a range of about 700 miles—but other key information is sparse.

The Chinese jet is also believed to be able to carry at least four long-range air-to-air missiles in its large internal weapons bay, while it also has two lateral bays that can hold a single short-range missile. It has also been further reported that that the J-20 could have additional external hardpoints for an additional four missiles—so it seems it could be a Mighty Dragon indeed and a well-armed one at that.

At present the J-20 hasn’t been produced in large numbers, but China has been a nation that has shown that it has patience to build up slowly. It is clearly playing a long game as it works to reach its goal of having a world class military. Moreover, it also is evident that stolen technology is playing a role in those efforts.

And while the dragon may be a symbol of China, its actual Mighty Dragon appears to be born of western innovation! – (TheNationalInterest)