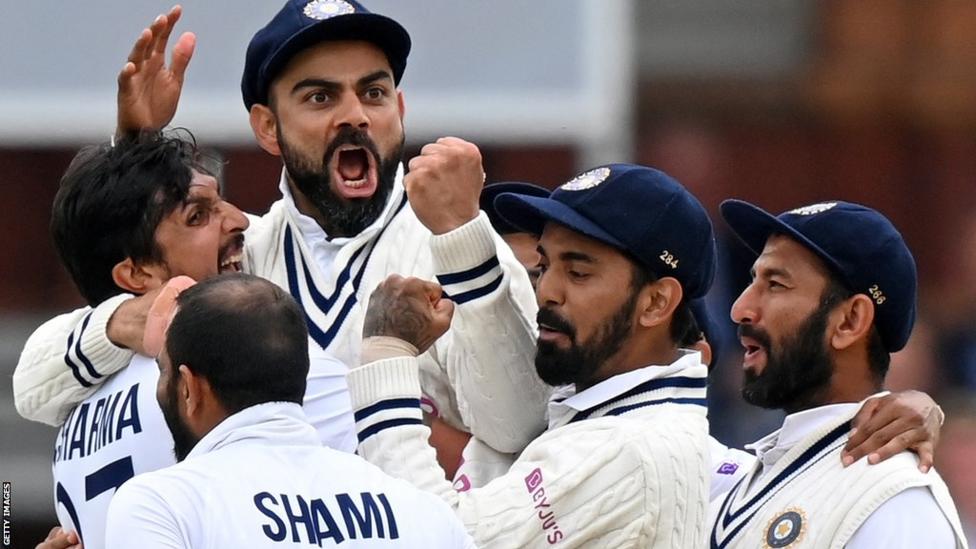 Captain Virat Kohli says his India team were “provoked” by England in the second Test – and will “not take a backwards step” when they meet again at Emerald Headingley on Wednesday.

India won an often ill-tempered game at Lord’s by 151 runs thanks to a remarkable fightback on the final day.

“This team is not going to back down,” said Kohli.

“What’s said on the field and what’s done in the moment gives you extra motivation.”

Kohli did not reveal what provoked him or his players, but there were several confrontations during a thrilling match that went into the final hour.

India pace bowler Jasprit Bumrah targeted England number 11 James Anderson with a series of bouncers on the third evening, and England responded to Bumrah and fellow tailender Mohammed Shami in similar fashion on the fifth morning during a spell which arguably cost them the match.

Kohli was also involved in a verbal exchange with Jos Buttler as England were bowled out for 120 on the final day, failing to bat out two sessions to secure a draw.

“The details don’t need to be discussed,” said Kohli, whose side lead 1-0 in the five-match series.

“It happens in the moment. It’s how you get up from that situation, that’s what matters.”

Bumrah bowled four no-balls in an over to Anderson in the first innings, hitting him on the helmet with one of several bouncers.

“I felt like he wasn’t trying to get me out. I’ve not felt this ever in my career,” Anderson, England’s all-time leading wicket-taker, told the BBC’s Tailenders podcast.

“They are a passionate side. They use emotion differently to how we use it. They channel it well – we saw that on the last day.”

England recalled batter Dawid Malan for Headingley – an opportunity he did not expect after playing the most recent of his 15 Tests in 2018.

He is set to bat at number three, with Haseeb Hameed – who returned to the team in that spot at Lord’s – likely to open after Dom Sibley was dropped.

“Realistically, did I think it would happen? Probably not,” said 33-year-old Malan, who averages 27.84 and has one century – against Australia in Perth – and six fifties from 26 Test innings.

“Sometimes you say the right things but don’t believe it will happen.

“I know I can play Test cricket. This is a fantastic opportunity, an unbelievable opportunity to get another crack at it.”

One of Craig Overton and Saqib Mahmood are expected to replace pace bowler Mark Wood, who will play no part at Headingley because of a shoulder injury sustained while fielding at Lord’s.

Somerset seamer Overton has taken nine wickets at 44.77 in four Tests, the most recent of which was in 2019.

Lancashire’s Mahmood has never played a Test, but was man of the series in England’s 3-0 one-day series win over Pakistan in July after taking nine wickets at 13.66 apiece.

India may recall off-spinner Ravichandran Ashwin, who has 413 Test wickets but was overlooked for the first two Tests.

“We’re quite surprised to see the pitch,” said Kohli. “I thought there’ll be more grass and it will be more spicy and lively.”