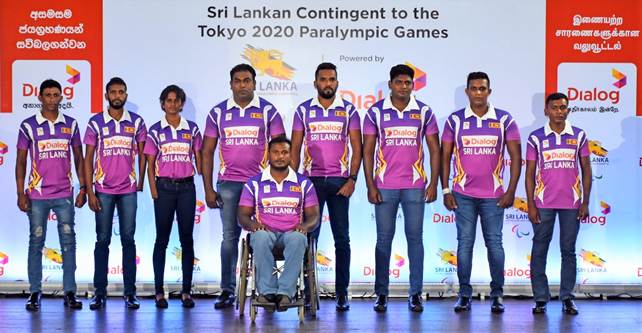 This August, nine Sri Lankan Paralympian athletes are set to take the stage once again at the upcoming Paralympic Games in Tokyo. Despite several adversities faced in the past, the athletes have overcome challenges thrown their way and continue to train untiringly in their respective sports. This year, the Sri Lankan contingent is confident in bringing home a medal, repeating the success of the 2012 and 2016 Paralympic Games.

They have shown great confidence and determination in representing and bringing glory to Sri Lanka, displaying high hopes in winning at this year’s games while proving their aptitude in achieving anything they set their minds to.

As the Paralympic Games draw nearer, the nine athletes are ranked top contenders in their respective sports. Representing Sri Lanka with much expectation is Dinesh Priyantha, the bronze medalist at the 2016 Rio de Janeiro Games in the javelin event, who will also be the flag bearer for the Sri Lankan delegation at the inaugural ceremony.

Despite the hindrance caused to their training during the pandemic, it is a highly commendable feat for the para-athletes to continue training. These athletes highlight qualities of true grit, perseverance and willpower to qualify for the Paralympic Games and stand as a true testament to the endurance and dedication held by Sri Lankans across the island. This year, the athletes are determined to showcase their talent and skills while breaking stereotypes. With their efforts, they hope to inspire other persons with disabilities to believe that there is a life beyond their challenges.

Sri Lanka first made its appearance in the 1996 Paralympic Games in Atlanta, Georgia, USA. In the London 2012 Paralympic Games, Pradeep Sanjaya, an ex-serviceman was the first Sri Lankan to win a bronze medal for the 400 meters’ sprint event. While on duty, Sanjaya lost his arm, however, the incident did not stop him from pursuing his passion. Sri Lanka’s glory continued at the 2016 Rio de Janeiro Games when Dinesh Priyantha won the bronze medal in the men’s javelin throw event.