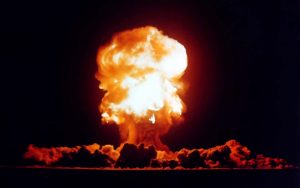 In June 1967, only thirty-two months after its first nuclear test, the PRC conducted its first thermonuclear test, and it produced a yield of 3.3 megatons—200 times greater than the atomic bomb dropped on Hiroshima.

by Peter Suciu
Here’s What You Need to Remember: Estimates suggested 194,000 people have died from acute radiation exposure, while around 1.2 million may have received doses high enough to induce leukemia, solid cancers and fetal damage. Those estimates are sadly likely to be on the conservative side.

On October 16, 1964, at the Lop Nur test site in a former salt lake in the desert of the country’s northwest, the People’s Republic of China detonated its first atomic bomb. Project 596, known as the code word “Chic-1” by the U.S. intelligence community (IC), was a uranium-235 implosion fission device made from weapons-grade uranium enriched in a gaseous diffusion plant in Lanzhou.

With that test, the first of forty-five successful subsequent nuclear tests conducted between 1964 and 1996, China became the fifth nuclear power in the world. All of the tests occurred at Lop Nur and a total of twenty-three were conducted in the atmosphere.

In June 1967, only thirty-two months after its first nuclear test, the PRC conducted its first thermonuclear test, and it produced a yield of 3.3 megatons—200 times greater than the atomic bomb dropped on Hiroshima. It was notable for multiple reasons. First, the thermonuclear weapon was designed as a bomb that could be delivered either by aircraft or ballistic missile.

Moreover, it highlighted the progress China’s nuclear program had made, and by comparison it took the United States eighty-six months conducting the first-ever nuclear test in July 1945 until the world’s first thermonuclear explosion in 1951. Though it is important to note that while China’s efforts to develop nuclear weapons actually dated back to the early 1950s, the Soviet Union assisted the Chinese nuclear weapons program significantly following agreements signed between Moscow and Beijing in 1951 and then in 1957.

However, with the cooling of Sino-Soviet relations in the latter part of the 1950s, Soviet Premier Nikita Khrushchev opted to refuse the provision of a prototype bomb to Beijing, and China was instead forced to develop its own nuclear testing project.

The last of China’s atmospheric tests, which was also the last atmospheric test in the world, took place at Area D at Lop Nur on October 16, 1980—sixteen years to the day from the first test. Since that time, all nuclear tests have been conducted underground. China’s nuclear testing officially ended in 1996, although it is believed that Beijing has continued to develop nuclear weapons technology—and this may follow U.S. strategy of conducting subcritical experiments.

In the spring of 2020, the U.S. State Department claimed that China may have conducted a low-yield underground nuclear test, which would have been in violation of the Comprehensive Test Ban Treaty (CTBT) concluded in 1996. However, neither Washington nor Beijing has ratified it, even though China has sworn to have adhered to the terms.

The effects of China’s nuclear testing, especially those nearly two dozen atmospheric tests, have not largely been studied due to a lack of official data. However, Xinjiang region is home to some twenty million people of different ethnic backgrounds—and it has remained unclear how radiation has affected the populace.

Reports have suggested that radioactive dust has spread across the region, and hundreds of thousands of people may have died already from the nearly four dozen total nuclear tests that were carried out between 1964 and 1969. A Japanese researcher, who studied the radiation levels, has suggested the peak radiation dose in Xinjiang exceeded that measured on the roof of the Chernobyl nuclear reactor following the 1986 meltdown.

Estimates suggested 194,000 people have died from acute radiation exposure, while around 1.2 million may have received doses high enough to induce leukemia, solid cancers and fetal damage. Those estimates are sadly likely to be on the conservative side. -(TheNationalInterest)