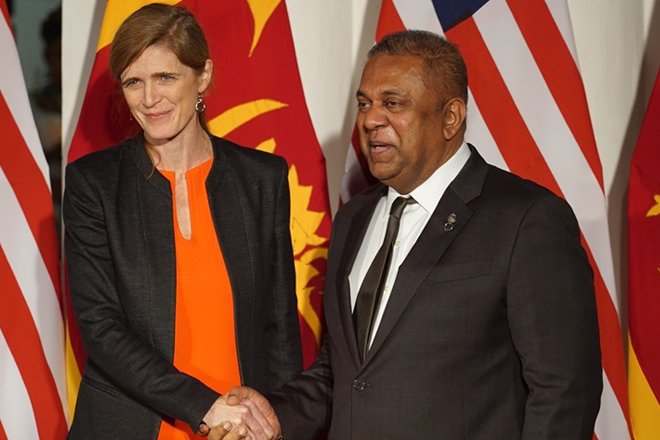 The former US Ambassador to the United Nations said that she was devastated by the passing of Mangala Samaraweera.

She said that Samaraweera was a great patriot and statesman, advocate for democracy and human rights, and a treasured friend.

“Mangala entered politics during a brutal civil war because he dreamed of peace, harmony and dignity for all Sri Lankans. He helped found the Mothers’ Front, which tracked information on Sri Lanka’s legion of disappeared while pressing for answers on their fate and accountability,” she said.

Power said that Mangala fought for justice and for reconciliation and as Foreign Minister he pushed to create the Office on Missing Persons, and for reparations to war victims and survivors.

As Finance Minister, he orchestrated the forgiveness of loans taken out by desperate families after the war.

“Mangala wanted to open Sri Lanka to the world, and and I’m grateful to have worked with him to strengthen US-Sri Lanka ties,” she said.

Samantha Power said that Mangala Samaraweera is one of the most remarkable public servants she has known and a profoundly good person.

She said she will miss his wise counsel, tremendous wit, and rare gift for friendship. (Colombo Gazette)