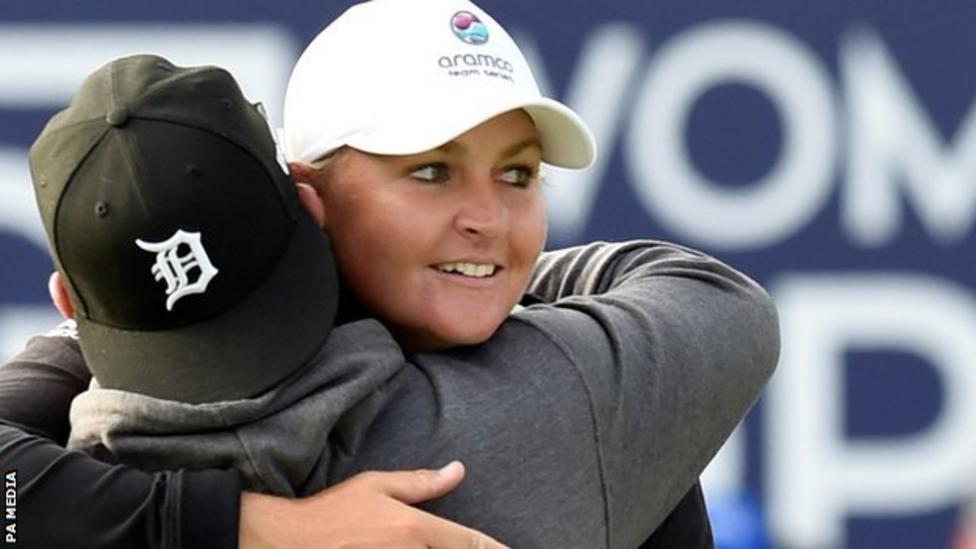 Sweden’s Anna Nordqvist won her third major title after holding her nerve to claim the 2021 Women’s Open on a thrilling final day at Carnoustie.

The 34-year-old was level with playing partner Nanna Koerstz Madsen on 12 under going down the last, keeping her composure to par and clinch victory as she watched the Dane double bogey.

England’s Georgia Hall finished in a tie for second place on 11 under.

Scottish amateur Louise Duncan was tied 10th on seven under after a fine week.

While it was ultimately a painful ending for Koerstz Madsen, the thrilling battle between the last pairing going into the iconic 18th was a fitting finale.

At one point of the dramatic afternoon on the Scottish links, there was a six-way tie for the lead and a play-off looked likely to be the way in which the champion would be determined.

Hall, the 2018 winner, shot a five-under 67 which included two eagles to set the clubhouse lead and was later joined by Sweden’s Madelene Sagstrom and Lizette Salas of the United States.

Sagstrom’s bogey at the last proved costly for her and the trio’s hopes of reappearing for extra holes in a play-off were dashed as Nordqvist navigated her way to victory.

Nordqvist won her first major back in 2009 with the LPGA Championship and added the Evian Championship in 2017, but has been on a barren run since.

Having not won a tournament since then and dropped outside of the world’s top 50, Nordqvist was not hotly-tipped to challenge at Carnoustie.

But she showed all of her quality and experience – particularly over the weekend after a tournament-low 65 on Saturday – to triumph.

“I’ve been waiting for this win for a while. There have been a lot of downs and hard times so this makes it feel even sweeter,” said Nordqvist.

“I could only dream of winning the British Open.”

In 2008, Nordqvist finished as the leading amateur at Sunningdale and warmly congratulated 21-year-old Duncan in her acceptance speech on the 18th green.

Stirling University student Duncan will take home the Smyth Salver prize after finishing as the leading amateur at the fifth and final women’s major of the year.

On her major debut, Duncan was two shots off the lead going into Sunday’s final round and shot a level-par 72.

“I’m over the moon with how I played and I couldn’t be any more proud of myself,” said Duncan, whose birdies on the first, 10th and 11th were wiped out by bogeys on the ninth, 16th and 18th.

“I’m a wee bit disappointed with the finish there but it’s to be expected – 72 is still a great score on Sunday.

“I was a wee bit nervous [at the start] and felt a wee bit sick actually but once I rolled in the putt on the first I felt fine. Even coming down the last I was absolutely fine, I wasn’t nervous at all.”

Hall, 25, started the day three shots behind overnight co-leaders Nordqvist and Koerstz Madsen, but moved into the six-way tie for the lead with an eagle on six and a birdie on seven.

Back-to-back bogeys dented her challenge before she birdied the 11th and then chipped in for another eagle on the par-five 12th.

After another birdie on 14, she was one behind Nordqvist and finished with four pars to set up a nervous wait.

“It was a very different position to the way it was before [when she won in 2018],” Hall told Sky Sports.

“In my head I thought five or six under was needed. I knew I was now in front of the leader and if I posted a good it would not be easy if you’re leading with three holes to play.”

World number one Nelly Korda, joint leader after round one, posted a level-par 72 to finish six under par. (Courtesy BBC)