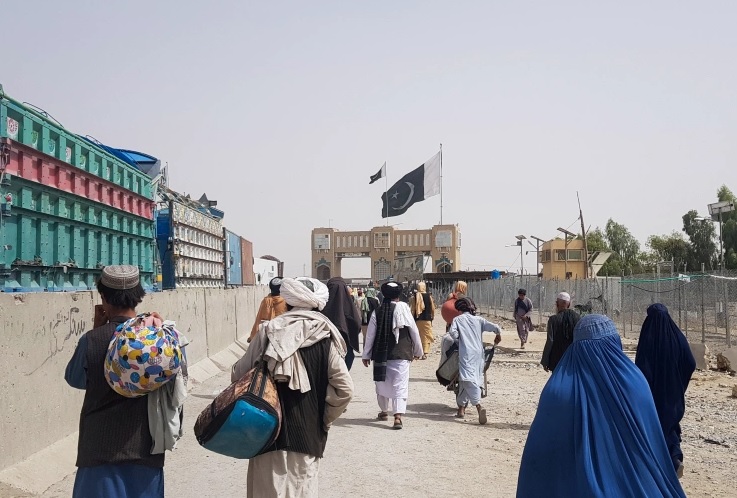 Since the days of the ancient Silk Route, Afghanistan has remained the sole connecting bridge between South Asia and Europe. For each of those regions, it has served as the gateway to the other. Despite the incredibly arduous travel through the mountainous terrains of the Khyber, traders have continued to ply on these routes for centuries.

Origins of the Mujahideen & Taliban

It was through these caves and mountains of the Khyber and Pakhtunkhwa that a local guerrilla group called the Taliban was first heard of, in the year 1994. Though historical accounts differ when it comes to the origin of the Taliban, it is said that its birth is intimately linked with the idea of the Pakistani government to water down the ideals of the tribal Pashtuns. Attempting to replace this brand of Pashtunwali Ghairat (honour) with their set of Islamic morals, the Pakistani government had set about trying to integrate and dominate over these Pashtuns within the Pakistani society.

In the late 1980s, General Zia ul-Haq, the commander of Pakistan, and Hamid Gul, his ISI Chief, established financial connections with the Saudis to be able to weaponise these Pashtuns with American arms. Under the leadership of the cleric group Jamaat-i-Islami, these Pashtuns launched an Afghani jihad against the Soviet Union. Of course, the underlying aim of the Pakistanis was to counter the Indian influence in the region through an illusionary strategic depth that the former wanted to create in Afghanistan. However, to their dismay and in the truest sense of karmic payback, these Pashtuns turned their backs on Pakistan after the Soviet Union withdrew from Afghanistan in the year.

Despite the nurturing by the ISI, these mujahideens refused to act in subservience to the Pakistanis. It was clear that the Pakistani project had failed miserably. Instead, what caused even more disbelief was the fact that these mujahideens approached New Delhi for support after they had announced the formation of a government in Kabul in the year 1992.

Scared at the prospects of a mujahideen government at Afghanistan that was not willing to play second fiddle to Pakistan, the Benazir Bhutto-led government sought to revamp the existing network by abandoning these mujahideens and instead supporting a fresh militia. It is this militia that was launched under the patronage of Jamaat-ul-Ulema-Islam of Maulana Rahman which would come to be known as the dreaded Taliban.

The turbulent 1990s saw the Indian strategic plan to connect Central Asia with the Persian Gulf for the first time. The flagship Indian railways project that would connect Turkmenistan (Sarakh) with Iran (Tajan) was understood to have been what prompted Pakistan to invest heavily in the creation of Taliban immediately. Additionally, in an attempted strategic manoeuvre, Pakistan quickly signed a haphazard deal with Saudi Delta and UNACOL to build a gas pipeline from Turkmenistan to Pakistan via Afghanistan. However, this was in contrast to the Afghan government’s decision to sign the pipeline deal with an Argentinian company, Bridas. It was in these dirty games of pipeline politics that the United States of America decided to support the Bhutto government. In fact, in an uncanny coincidence, it was Z. Khalilzad – presently serving as the Special Envoy on Afghanistan – who negotiated with the Taliban for the UNACOL deal.

The sole obstacle that remained to this pipeline deal was the government in Kabul itself. Perceived to be pro-India, the Rabbani government had already decided to proceed with the Bridas pipeline deal.

In a joint effort, the Saudis along with the CIA and ISI decided to step in militarily to push the Taliban efforts of gaining large swathes of Afghan territory in the year 1995. In a pushback, all factions of the mujahideens rallied around the Rabbani government in Kabul against this interference from foreign powers. However, facing the military alliance of American weapons, Saudi money and Pakistani operations, it took only 2 months for the Taliban to capture Kabul in September 1996.

Despite the proximity and the ambitious Belt and Road Initiative (BRI) that China has pushed through, there has been negligible public participation from China with respect to the Taliban-Government of Afghanistan negotiations. However, it would be naivety to state that China is not bothered or affected by how the situation is unfolding in Afghanistan.

Till date, China has mostly relied on Pakistan to conduct its Afghan policy. Unconcerned whether civilians can be provided governance by those with pens or guns in their hands, what matters to the Chinese is the possible instability in a post-withdrawal Afghanistan. During the Taliban reign in Kabul, Pakistan facilitated China’s direct contact with the group.

Later, when regional diplomacy to reconcile the civilian Kabul government and Taliban gathered momentum, China began wooing the Taliban. It remains to be seen whether this translates to more coordination or not. However, China fears that a Taliban regime may provide safe haven to and even the necessary training to Uighur separatists that have been tortured and tamed in China for the last few decades.

All past external interventions in Afghanistan, 1830s and 1840s for Britain, 1970s for Soviet Union and 2000s for United States of America, have ended in complete disasters. However, no country currently possesses the wherewithal to lead an intervention (unilateral or regional) to stabilise the region leaving China to provide infrastructural and funding support indirectly to players that possess a sphere of influence in Afghanistan.

Employing smart negotiation tactics and a brave display of foreign policy power, New Delhi went on to ensure that the Taliban regime did not obtain any legitimacy on the diplomatic front throughout their short reign. Time and again, India went ahead to point out the Taliban’s dependence on the ISI, their links to extremist ideology and their open displays of bigotry and intolerance as well. Needless to say, these actions badly irked the Taliban.

Though there were many voices within the Indian camp that called for the Government of India to be on the side of the ruling power in Kabul, the tide had taken a shift towards the immediate neighbourhood thereby pushing Afghanistan to the backburner for the time being. Gradually, with major strategic victories, Taliban gained an even stronger foothold in the country.

However, to everyone’s surprise and Pakistan’s dismay, Taliban did not make any hostile overtures towards India during its reign. In fact, in late 1996, Taliban went ahead to warn Islamabad that any plans of the latter to raise an alternative Afghan guerrilla force would force the former to seek India’s help in the region. In India, however, the fear remained that Taliban would muddle its way into the Kashmir dispute if it obtained access to the Pakhtunkhwa-PoK area.

Thankfully, those fears have largely remained unsubstantiated. Insurgency in Kashmir has largely been driven by the Haqanni and Hekmatyar networks backed solidly by the ISI. The idea of frightening the Indian mass of Taliban’s monstrosity can be considered as a significant asset for the ISI to use them against India. But with respect the Taliban, there has been no direct evidence of any overt or covert involvement in Kashmir. In fact, apart from some nebulous statements on supporting Muslim causes, there were no implicit proclamations on Kashmir in the last 30 years of Taliban’s existence either.

Interestingly, in the aftermath of New Delhi’s decision to suspend Article 370 that granted a special status to Jammu & Kashmir, Taliban issued a strong statement rebuffing the Pakistani policy of linking the Doha talks of Taliban-USA with the issue in Kashmir. A recent statement by the official spokesperson of the Taliban expressing willingness to enact laws against foreign terror groups acting against other countries on its soil needs a transparent and fair analysis as well. These provide a solid  base for the newfound conformity in the Taliban’s stance on India.

It would be in the best interests of the volatile region if India is able to engage in indirect talks with the Taliban through the Doha mechanism or can maintain a direct line of communication to arrive at a possible solution that is Afghan-led, Afghan-oriented and protects Indian strategic interests as well.