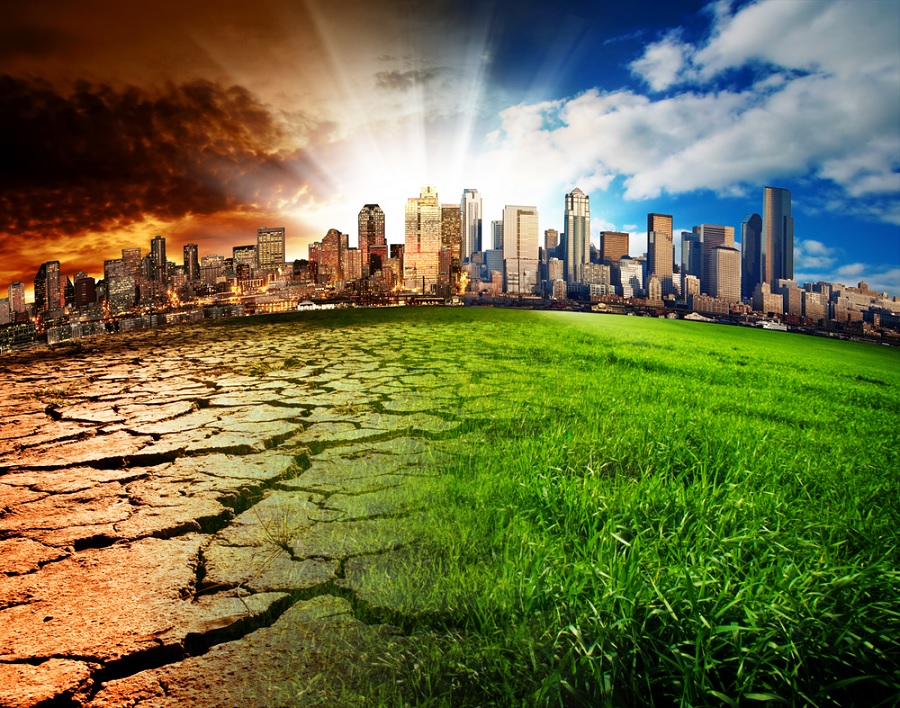 The U.N.’s IPCC climate panel has released a highly anticipated report warning that efforts to limit global warming to close to 1.5 degrees Celsius, or even 2 degrees Celsius above pre-industrial levels, “will be beyond reach” in the next two decades without immediate, rapid and large-scale reductions in greenhouse gas emissions.

The 1.5 degrees Celsius threshold outlined in the report is a crucial global target because beyond this level, so-called tipping points become more likely. Tipping points refer to an irreversible change in the climate system, locking in further global heating.

The Maldives is among the countries at grave risk from climate change. There are fears, in years to come, the Maldives will go under water.

Q. This report gives the impression most countries have given less priority to protecting the environment and we are now facing the consequences. Is it too late now?

Hanaa Singer: According to the report, escape from the human-caused climate change is no longer possible. Climate change has now affected every continent, every region, every ocean of the earth and every facet of the weather. However, there is still time to avert the worst damage,  if humanity chooses to. So to go back to your question, the purpose of the report is to high light that we are at a turning point. We can make changes now or we can suffer dire consequences. For example, because of green house emissions from human activities, in the next 20 years global temperature is anticipated to approach or exceed 1.5 degrees centigrade. The carbon dioxide concentration in the atmosphere was greater in 2019 than it had been in at least 2 million years. Another point is that the concentration of methane and nitric oxide was higher than at any time in the last 800,000 years. So you can imagine the magnitude of the crisis we are in. But we say also that we still have a chance to stop the negative climate trends by limiting the use of fossil fuels and by stopping deforestation. So the world needs to make deep carbon pollution cuts now and we need to see an end to coal and fossil fuels before they destroy our planet and destroy humanity. There must be no new coal plant built after 2021. We need to see developed countries phasing out existing coal by 2030, with all countries doing the same by 2040. Countries should also end all new fossil fuel exploration and production and shift fossil fuel subsidies into a renewable energy. By 2030 solar and wind capacities should increase by four times and renewable energy investments should triple, if we are to safeguard the future of our planet. And I underline this very strongly. We have not lost hope and we can still take action to limit the impact of our actions on the planet.

Q. What are the countries at bigger risk from climate change, especially in this region?

Hanaa Singer: Climate change impacts every part of the world and we need every single country to play a role in mitigating the impact of human activity on the planet. We are seeing record-breaking temperature, the drought and forest fires, just this year in the Mediterranean, Russia and North America. And who can forget the terrible fires that happened in Australia last year? So global warming means more water vapour in the atmosphere and this has led to severe flooding, for example in Europe and in China. Now the warming of the ocean has also affected the frequency, intensity and the locations of tropical storms. So there is no location on earth where we can escape the impact of climate change. The report doesn’t specify countries. However, it notes that for the South Asian region, heat waves and humid heat stress will be more intense and frequent. The second point is that both annual and summer monsoon precipitation will increase, which means increase in rainfall as well. Now, in the wider Asian region, the report also says that the relative sea level around Asia has increased faster than the global average, with coastal area loss and shoreline retreat. Another point is that the regional mean sea level will also continue to rise. Now, what does this mean for us, for Sri Lanka? Sea level rise, coastal erosion, increase in water temperature and the high acidity can have significant implications for marine ecosystems which most coastal communities depend on. So those who are most at risk with climate change are those with limited capacity to cope. This is highly dependent on the level of economic development. So livelihood sources of the poor are usually narrowed and more climate-sensitive. So extreme weather events which would cause limited damage and few casualties in a developed country often cause extensive damage and substantial loss of life in a developing country.

Q. What short and long term impact do you see on the Maldives from climate change?

Aminath Shauna. Climate change is an existential threat for the Maldives and the climate emergency that has been confirmed by the most recent IPCC report really proves that it continues to be an existential threat for the Maldives. 80% of our islands are just less than 1 metre of sea level and we don’t have a higher ground to run to. Over 90% of the islands reported flooding annually and 97% of the islands report shoreline erosion. 64% of the islands experience severe erosion. Nearly 50% of the housing structures are also within just 100 metres from coastlines. Therefore, most islands cannot withstand tidal floods, let alone tsunamis. Our income, our food and our survival depend on these vulnerabilities.

Q. Has the Maldives taken urgent steps to protect itself from climate change?

Aminath Shauna:  The government has world-leading policies to address the impact of climate change and the environmental degradation. We have the world’s most sustainable fisheries. There’s a lot that we can do to protect the environment and to ensure the climate threat turns into an opportunity. We can shift our economy from running on diesel to running on sunshine. In this regard, the Maldives has a very ambitious target to reach net zero emissions by 2030. We also have a policy to protect 20% of our marine resources by 2030. We have started this process and we are already implementing some of these policies. We have policies to phase out single-use plastic by 2023. And these are world-leading policies that we have taken to address the impact of climate change.

Q. What kind of support can Maldives get from its South Asian neighbors to battle climate change?

Q. What role has the UN played over the years to push for policy changes to protect the environment?

Hanaa Singer: The UN has been extensively implicated and involved in this area. Most recently, for example, the 2019, the Climate Action Summit to increase and accelerate climate action and ambition. The Summit focused on key sectors where the action can make the most difference. Then there is the iconic Paris Climate Agreement in 2015 where the three areas of agreement, where the first was to substantially reduce green house gas emissions to limit the global temperature increase to 2 degrees Celsius while also pushing to limit it to 1.5 degrees. The second was to review countries’ commitment every five years and the third agreement was to provide financing to developing countries to mitigate climate change, strengthen the resilience and enhance the capacity to adapt to climate action. There is also another very critical protocol called the Kyoto Protocol that was agreed on in 1995 which legally binds developed country parties to emission reduction targets and then we have the Earth Summit, the United Nations’ framework convention on climate change, what we call the UNFCCC that was agreed on in 1992. This was a predecessor to the Paris Agreement and it aimed to prevent dangerous human interference with the climate system.

Q. You represent the UN in Sri Lanka which is also an island and at risk from climate change. What are the changes the UN is encouraging Sri Lanka to make to protect the environment?

Hanaa Singer: Enhancing resilience to climate change and disasters and strengthening environmental management is absolutely a very critical component of our four main objectives of the UN strategic plan in Sri Lanka and will also be a core in the new country programme. Now we work in partnership with the government, civil society, environmentalists, communities and a host of other stakeholders to come up, together, with a feasible solution. Now Sri Lanka has made some very good commitments in the past few years and the national climate change adaptation strategy focuses on both adaptation and disaster risk management. So, for example, Sri Lanka has communicated, updated a more ambitious nationally determined contribution to UNFCCC in achieving the set targets of the Paris Agreement in a local context. Sri Lanka also spearheaded the Colombo Declaration on sustainable nitrogen management in 2019 and the declaration was endorsed by the United Nations member state as a proposed roadmap for action on nitrogen challenges. Now there are various changes that can be made across sectors. Let me give you a few examples. This is not an exhaustive list. But let me start with energy. We must promote renewable energy technologies in place of the fossil fuel fired plants wherever they are technologically and economically feasible. The second area is the prevention of waste through sustainable waste management and the environmentally sound management of hazardous waste. In agriculture, for example, we need climate smart agriculture technique. There is a need to promote conservation, farming techniques and to make farmers aware of climate change and different adaptation options. For coastal conservation there is a need to delineate critical areas and prepare to develop a special integrated coastal zone management plan, building on post covid-19 green economy by engaging partners and stakeholders. Now all of these areas I mentioned, many of our UN agencies are working in these areas in partnership with the government, the civil society, the environmentalists and communities.

In wrapping, we are at a critical juncture as the UN Secretary-General has called it a ‘Code Red’ of humanity. However, hope is not lost. We can still turn things around or at least mitigate our damage to the planet. But this requires accelerating our efforts and working together now in solidarity.