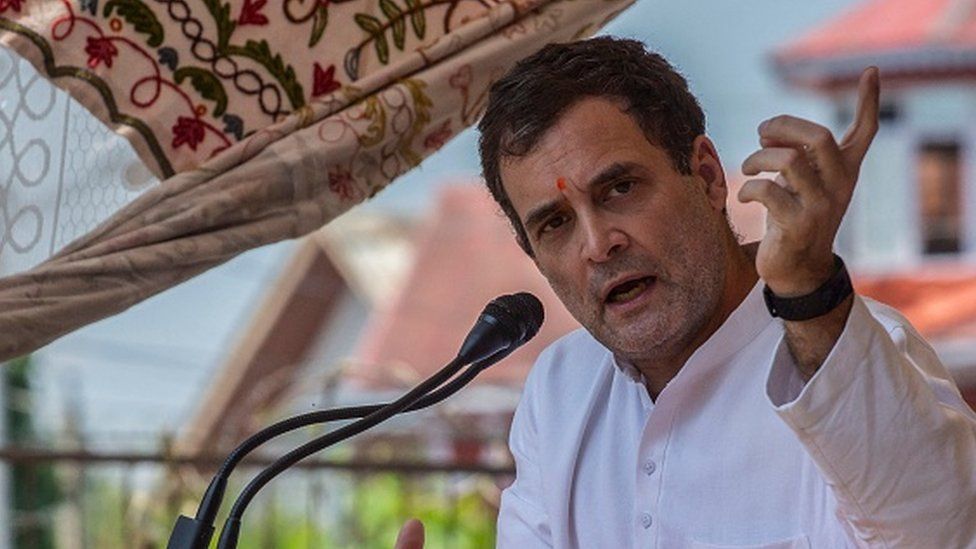 Senior Congress leader Rahul Gandhi has accused Twitter of “attacking Indian democracy” after it locked accounts of top party leaders, including his own.

The accounts were locked after they tweeted a photo of the parents of a nine-year-old, who was allegedly raped and murdered in the capital, Delhi.

The Congress party accused Twitter of acting on orders from the ruling party.

Mr Gandhi, who has nearly 20 million followers, said in a video message on Friday that by shutting his account, Twitter was interfering with India’s political process.

“This is not, you know, simply shutting Rahul Gandhi down. I have 19-20 million followers. You are denying them the right to an opinion. That’s what you are doing,” he said.

Mr Gandhi’s photograph with the parents of the nine-year-old Dalit girl, who was allegedly raped and murdered by a Hindu priest and his accomplices in the capital, Delhi, was taken on 4 August when he visited the family.

The child’s family had alleged that her attackers had tried to forcibly cremate her without their permission. The incident triggered protests and outrage in the country.

Twitter deleted Mr Gandhi’s post after India’s child rights body asked it to remove the photograph from its platform, pointing out that it revealed the identity of the rape victim – which is forbidden under Indian law.

As Mr Gandhi refused to delete the image, the micro-blogging site locked his account on 6 August and he has been unable to tweet since then. Over the past few days, the official account of the Congress party, several of its leaders and “about 5,000 volunteers” – who had retweeted Mr Gandhi – have also been locked.

Congress spokesperson Randeep Singh Surjewala told the BBC that “the law only says that one cannot put out the photo of the victim or give details of the family and that we’ve done neither”.

He also pointed out that the mother of the young woman, who was gang-raped and murdered on a bus in Delhi in 2012, was extensively interviewed by the Indian and the global press and her photographs and videos were routinely shared on social media. “So, how come the rules didn’t apply there?” he asked.

In a statement sent to the BBC, Twitter said it took “proactive action on several hundred tweets that posted an image that violated our rules”.

“Certain types of private information carry higher risks than others, and our aim is always to protect individuals’ privacy and safety,” it added.

But Mr Surjewala rejected the claim and said that Twitter’s reasons were “politically coloured, mischievously motivated, and downright malafide” and accused it of being “completely subservient to the Modi government” – an allegation Twitter has denied.

He alleged that the National Commission of Scheduled Castes, an organisation appointed by Prime Minister Narendra Modi’s government, visited the family and tweeted the parents’ photo on 2 August.

“A former BJP MP, who’s a member of the commission, several TV channels and newspapers also did the same but have not faced any action,” he said.

At the height of the farmers’ protests in February, Twitter had briefly blocked dozens of accounts after the country’s home ministry complained that users were encouraging violence and spreading misinformation.

More recently, Indian police visited Twitter’s offices after it tagged a tweet from the ruling party member as “manipulated media”. The company had expressed concerns over freedom of expression in India after the raids. Several social media firms, including Twitter, were recently at loggerheads with the government over India’s new IT rules. (Courtesy BBC)