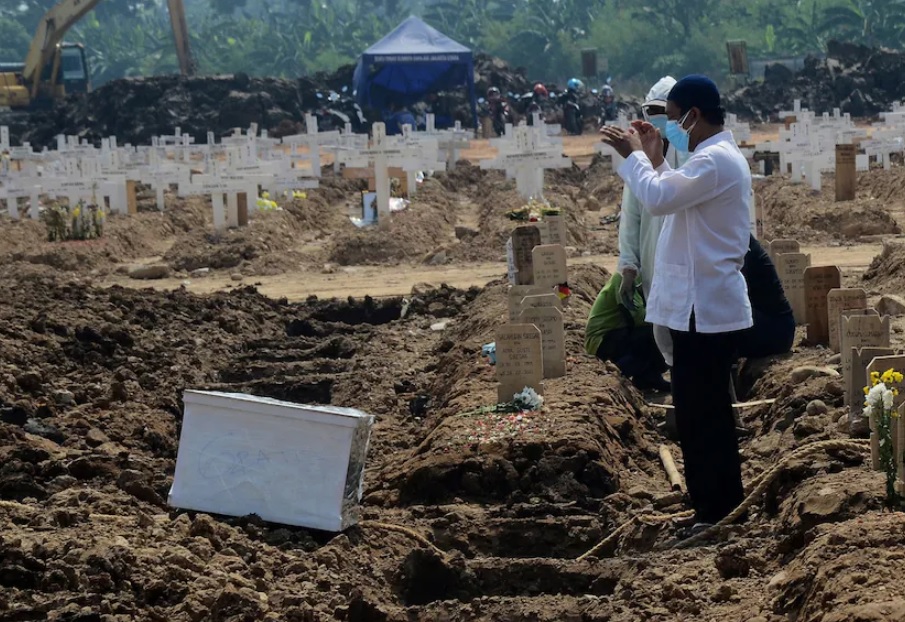 Southeast Asian countries that had widely rolled out Chinese-made coronavirus vaccines are turning away from the shots in favor of Western alternatives as they scramble to contain deadly outbreaks caused by the delta variant.

The shift in a region where China vies with the United States for influence underscores the limits of Beijing’s vaccine diplomacy. Countries such as Indonesia and Thailand once bet heavily on China’s Sinovac, despite warnings from medical experts, but their health systems have come under intense strain as the delta variant tears through towns and cities. Indonesia has recorded more than 100,000 deaths overall.

“The current reality does present a stark contrast to the fanfare with which Beijing rolled out their vaccines and then insisted on their high efficacy, even when data was less available,” said Chong Ja Ian, an associate professor of political science at the National University of Singapore who studies U.S.-China competition in Asia. The change, he added, shows “how risky it is to try to make the current pandemic, and the very real dangers to human life, into a sort of propaganda tool.”

Sinovac and Sinopharm were among the earliest to begin clinical trials, but they did not release full data. Millions of people have taken the shots, which governments rushed to procure amid supply constraints before the United States pledged to share doses. With wealthier nations snapping up Pfizer and Moderna, some developing countries had little choice but to look to China.

Doubts over Sinovac’s efficacy grew in June, when fully vaccinated Indonesian doctors began dying of covid-19. The Indonesian Medical Association has recorded at least 20 deaths of doctors who were doubly dosed with Sinovac. Earlier that month, the World Health Organization approved the vaccine for emergency use.

Representatives for Sinovac and Sinopharm did not respond to requests for comment. Sinovac told China’s state-run Global Times newspaper in June that its vaccines cannot give 100 percent protection but can reduce severity and deaths. Sinovac CEO Yin Weidong, speaking last week at a forum hosted by China’s foreign minister, said the company will submit its clinical research and emergency use applications for the delta variant to Chinese regulators in coming days, and said the company has “sufficient production capacity” to develop and produce the vaccine in response to the new strains.

Among the casualties in Indonesia was Novilia Sjafri Bachtiar, the lead scientist in the country’s Sinovac trials, according to local media. The nation of 270 million began administering the U.S.-made Moderna vaccine in late July to health-care workers, after Washington donated 8 million doses.

Scenes of these donations — in boxes emblazoned with American flags — contrasted with those in January, when Indonesian President Joko Widodo received his Sinovac shot on live television. Health officials held up the vaccine box, adorned with Sinovac’s name, to boost trust in the doses. Chinese state media hailed Widodo’s move while touting the vaccine as “safe and effective.”

Thailand has also moved to mix shots, changing its policy in mid-July to immunizing people with a first shot of Sinovac and a second shot of AstraZeneca. Health-care workers who are already fully vaccinated with Sinovac will receive a third booster shot, either of AstraZeneca or an mRNA vaccine such as Pfizer or Moderna.

Before the policy change, Thai media reported the existence of a memo, supposedly leaked from an official meeting about vaccine use, that warned against giving a different booster shot to those already fully vaccinated with Sinovac because doing so would be an admission that the Chinese-made shot “can’t give protection.” The leak prompted an outcry, and the hashtag #GivePfizerToMedicalWorkers began trending on social media.

Even Beijing’s closest allies are making the switch. Cambodia said last week that it would start offering AstraZeneca booster shots to those who had received two doses of the Chinese-made vaccines, which have already been rolled out to about half of the population.

Responding to a question in May on whether Cambodia is too dependent on China, Prime Minister Hun Sen dismissed the suggestion as “unjust.”

“If I don’t rely on China, who will I rely on? If I don’t ask China, who am I to ask?” he said. “Without assistance from China, maybe we will not have vaccines for our people.”

China has held up its vaccine donations as a public good, especially for developing nations, while criticizing vaccine nationalism. President Xi Jinping said last week that the country would provide 2 billion doses to the world this year.

Yet even before the delta variant surge, people showed a preference for Western-made vaccines, particularly the mRNA shots developed by the United States. A survey early this year in the Philippines showed more than 63 percent of adults preferred the United States as a source of coronavirus vaccines. In May, residents flocked to the one site offering Pfizer doses, with lines forming from 2 a.m.

“We saw this huge divide even in the medical community among those willing and outright not willing to receive Sinovac,” said Vincen Gregory Yu, a physician and public health researcher. He said he encountered vaccine hesitancy among his peers and family, who signed up for Moderna through the private sector.

“In most cases, it’s not really, ‘We don’t want this vaccine because it’s not effective,’ ” he said. Instead, he said, it’s more that “ ‘we don’t want to accept this because something better will arrive.’ ”

Philippine President Rodrigo Duterte, who declared early in his term that he would say “goodbye” to Washington, a long-standing ally, maintains warm relations with China. He accepted another million doses of Sinovac days ago as his country endures a new lockdown amid a surge in infections.

But he admitted that his decision to preserve a defense pact between the United States and the Philippines was influenced by a recent donation of Moderna vaccines from Washington.

“It’s give and take. Let’s thank them, and I gave them a concession,” Duterte said.

Chong said the vaccine experience has made some Southeast Asian countries realize “that reliance on the People’s Republic of China is not enough, whether on vaccines or other matters.” (Courtesy Washington Post)