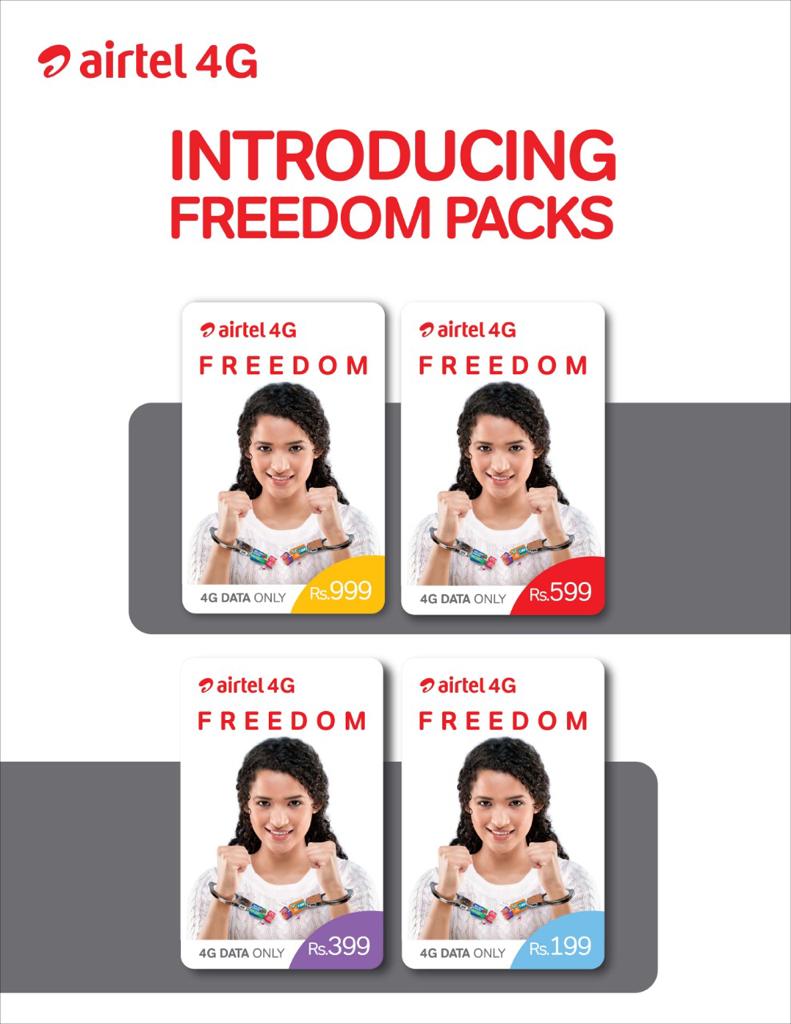 Airtel has transformed Sri Lanka’s telecom landscape by launching its 4G services along with first-of-its-kind ‘Freedom Packs’. With just one reload, Airtel ‘Freedom Packs’ offer enough and more data and voice benefits for the entire month – with no conditions attached. All this comes with a superior experience on Airtel’s world class, buffer-free 4G network.

With the Freedom Packs, Airtel has eliminated the need for multiple reloads, ushering in an era of transparent, condition-less data and voice benefits. Furthermore, there has been a drastic surge of internet usage due to the pandemic. The innovative product is based on customer insights and underscores Airtel’s philosophy of innovating to simplify customer experiences.

The packs come in four different bouquets to suit different usage needs and will offer 5 times more value, with an unmatched customer experience. Each of these packs includes generous high speed daily data that can be used for any internet requirement including Social Media, WFH, SFH etc. For voice usage, all packs offer unlimited Airtel calling and ample minutes and SMS for any network calling. Additionally, for the light to medium users, ‘Freedom Lite’ offers two tailor-made packs sufficient for their mobile consumptions. Airtel has also reduced the other network call tariff by 66% for any usage beyond the built minutes, another unique feature of ‘Freedom Packs.’

“With this pioneering launch, Airtel brings much needed simplicity and the best value for Sri Lankan telecom customers. Users can now do more on a world class 4G network, using our ‘Freedom Packs’ without ever having to worry about restrictions of any kind. Now is the time to switch to Airtel,” Airtel Sri Lanka MD & CEO, Ashish Chandra said.

Sri Lanka collectively uses approximately 3 million recharges in a day. That’s a staggering statistic relative to an adult population of only 14 million. This trend is intensified by the proliferation of cards in the market. This typically spans everything from specialist packs for voice and data, conditions on time of usage, conditions on quality, and separate packs focussed on social media, and work from home platforms. As a result, consumers tend to lose track of what they are spending, and what they buy in exchange – a reload trap if ever there was one.

With Airtel ‘Freedom Packs’ users can now break this cycle, only requiring a reload once a month. The single reload is sufficient for a user to consume their mobile needs as they would normally as there are no usage restrictions. The price points in which the packs are designed offer up to 5 times the value of an average prepaid user’s monthly spend.

The ‘Freedom Packs’ is backed by the telco’s single largest investment in Sri Lanka since its entry into the island in 2011. Airtel’s purpose-built 4G network promises a superior user experience including 99% buffer-free streaming, noticeably quicker loading times and improved indoor coverage with 4G signals that never fail.

Bharti Airtel Lanka (Airtel Lanka) commenced commercial operations of services in Sri Lanka on January 12th, 2009, and was the fastest operator to reach 1 million customers in the country. With its network footprint panned out across the nation and capturing strategic ranking positions in various areas in less than three years of operations, Airtel has emerged as Sri Lanka’s fastest expanding network, thus ensuring coverage across the whole island. Registered under the Board of Investment in Sri Lanka, Airtel provides digital mobile services which include voice and data services. To learn more, visit www.airtel.lk.