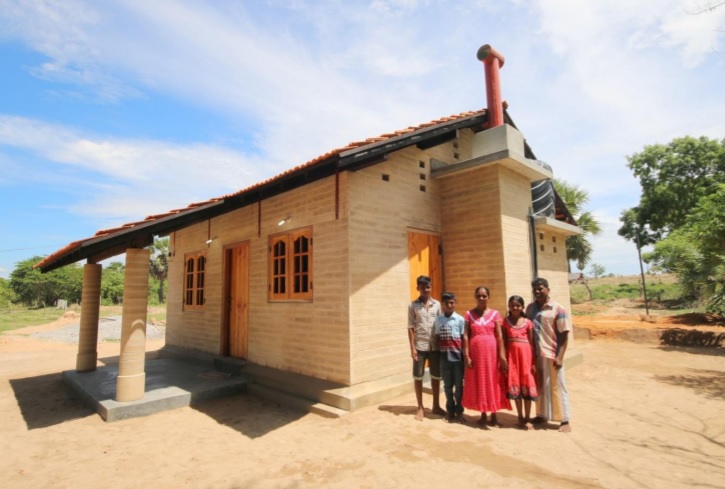 Habitat for Humanity Sri Lanka and its partners successfully concluded a European Union (EU) funded project in the North and East which empowered more than 2,370 returnee families to resettle and rebuild their lives.

The multi-year, multi-faceted undertaking empowered returnee families to resettle and rebuild their lives and future through shelter interventions and flanking measures that included livelihood and SME assistance.

The EUR 14 million “Homes not Houses Project” featured the use of appropriate construction technologies and materials in about 45% of the houses built, exceeding the minimum target.

Throughout the project—known as one of the best examples of Habitat’s climate-sensitive initiatives—families and masons had opportunities to learn about the benefits and utilize appropriate construction technologies and materials.

By the close of the project that began in January 2016, more than 1,000 homeowners chose to use eco-friendly materials such as compressed stabilized earth blocks that are an alternative to mining sand. A feasibility study published by the European Union has cited the blocks as a low-carbon, low embodied energy solution that contributes to sustainable development.

Based on a homeowner-driven approach, families managed their available resources using grants from Habitat Sri Lanka and built homes at their own pace with Habitat’s technical assistance to ensure construction quality.

Ushathevi, 43, was among the first in the Vilawedduwan village of Batticaloa, to build her home with compressed stabilized earth blocks in 2017. She and her husband made the choice after visiting Habitat’s block-making yard. “After we saw that compressed stabilized earth blocks (CSEB) were stronger than fired bricks or cement sand blocks, we decided to build a house with CSEBs,” said her husband Thillaninathan, 47. Since moving in nearly four years ago, the couple has received over 1,000 visitors who checked out the durability and aesthetics of their house that remained cooler in hot weather and warmer when it was cold outside.

“The Homes not Houses project is an important component of the EU’s long-term support to people affected by the war, including the internally displaced, to return, to rebuild, to find home,” said Ambassador of the Delegation of the European Union to Sri Lanka and the Maldives Denis Chaibi.

“I am immensely proud of the work done over the years to support the owner-driven reconstruction of more than 20,000 homes, investing more than EUR 50 million. The EU strongly believes that sustainable peace and stability requires addressing the socioeconomic impacts of war, and I thank Habitat for Humanity Sri Lanka for their important work in this context. For the future, the EU will actively support the socioeconomic development of the most vulnerable parts of the country through investments in a green economic recovery.”

“Over the last five years, Habitat for Humanity Sri Lanka is honored to work alongside families in need of safe, secure housing in the ‘Homes not Houses Project’. Displaced by the decades-long civil war, these families in Batticaloa, Kilinochchi and Mullaitivu districts can finally start building stability and self-reliance through shelter. Children can study and play in a healthier environment, parents can focus on improving their livelihoods and communities can contribute to social cohesion,” said Yu Hwa Li, Habitat for Humanity Sri Lanka national director. “We are grateful for the support of the European Union and World Vision Lanka.”

Through the project’s flanking measures implemented by World Vision Lanka, about 46,000 people improved their self-sufficiency through skills training and livelihood support in husbandry, agriculture, home-based construction enterprises, and built resilience through disaster risk reduction mapping and drainage and culvert improvements.

With the completion of the “Homes not Houses Project,” Habitat Sri Lanka continues to use compressed stabilized earth blocks in the GRACE Project in Katana, Gampaha district. About 100 families including those with members living with disabilities, women-headed households and older people will be able to incrementally build lockable core houses with sanitation facilities while another 50 people can access livelihood opportunities. (Colombo Gazette)