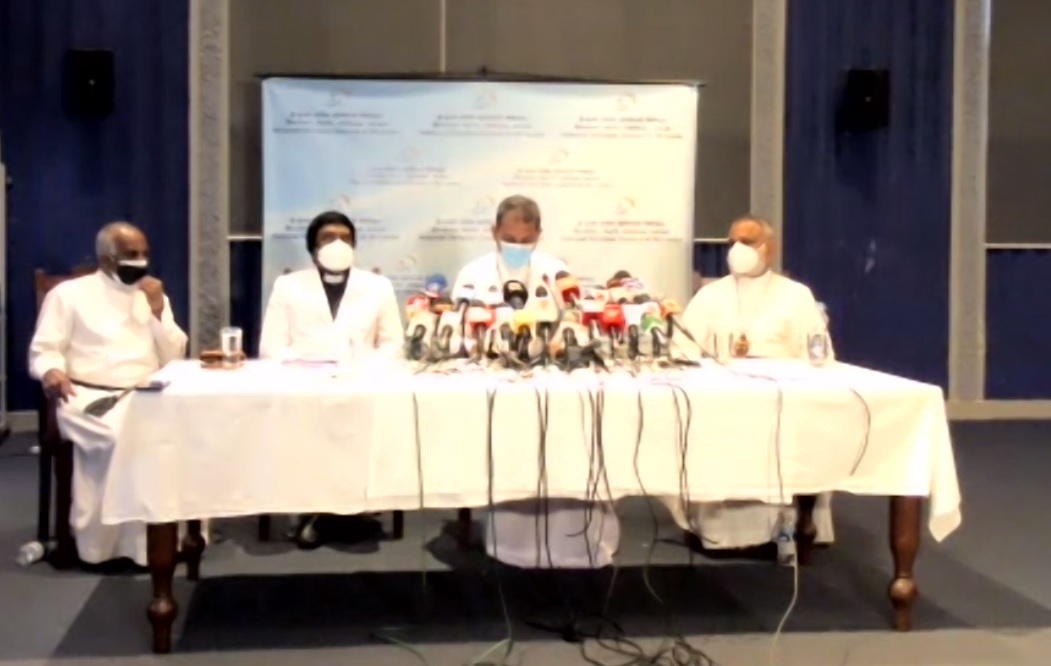 The National Christian Council (NCC) may not be technically competent to comment on what they call the looming fertilizer shortage snowballing into a national food crisis, yes.

In the absence of the fertilizer industry, traders and farmers’ organisations not saying enough, theirs may be a voice in wilderness, alerting the people and the voters alike on what to anticipate and what not to expect from the staple rice crop. If nothing else, the NCC seemingly gets inputs from the grassroots, from parishes upwards, and it may be worth the government’s technocrats and administrators to take a closer look.

A recent NCC news conference focussed on education with the controversial Kotelawala Defence University (KDU) Amendment Bill and other aspects of education. Once upon a time, education was considered the near-exclusive concern mainly for Tamils, but now it embraces all sections of the Sri Lankan society.

Mainline Sinhala parties, and even the Tamil parties, starting with the TNA, better watch out for a ‘unified’ Christian entity emerging as a national alternative in electoral terms, however limited. Yes, on crucial issues of common Christian concern as the nation keeps moving away from the ‘ethnic war’, flagged by shocking episodes as the ‘Easter serial-blasts’, they could still come together. Keeping the focus on events immediate, they can encourage the community to vote in a particular way – more against than for a particular party, leader or candidate.

The Tamils of every electoral hue are past masters in the game. Post-Aluthgama 2014, and post-Easter blasts 2019, even more, the Muslim community forced their divided polity to stick to a common electoral adversary – whether or not they believed in their people’s choice. Now, it may be the bi-lingual Christian community with layered cultures of their own, is inching towards a point – at times, a point-of-no-return.

Should such a thing happen, there would go the so-called ‘British cosmopolitanism’ of Sri Lanka would have taken a beating for the good. With that national unity in every which way – again for good. Then you can blame the British colonial master’s much-criticised ‘divide-and-rule’ policy, Sirimavo’s First Republican Constitution that made Buddhism the State religion as a new Sri Lanka was born out of the forgotten Ceylon, S W R D Bandaranaike’s ‘Sinhala Only’ law, and so on….

It is not as if no concern has been expressed about the existing fertilizer shortage and the possibility of an emerging food scarcity, too. A South Asian nation like Sri Lanka that depends entirely on the Nature’s bounty for prosperity, more so, adequate availability of food, cannot take the risk, or so it seems.

You can blame the Nature that it is not as consistent as it should be or as consistent as our politicians. Thus, when it is rains in the South, it could be drought or floods in the North, and vice versa. The nation has fallen into a predictable pattern of rains, droughts and floods following one another. Of them, droughts and floods play havoc with agriculture processes and leave farmers, poorer.

Food availability and scarcity are also linked to electoral politics, as may be recalled from recent experiences. In the post-war 2010 presidential polls, incumbent Mahinda Rajapaksa swept back to power despite motivated rumours of rice shortage (when government records showed a surplus, possibly).

In 2015, such rumours were quelled when the government hurriedly imported 25,000 tonnes of rice from Bangladesh and held it back in Colombo Port. Or, so went rumours and reports alike. Rice shortage vanished and rice prices steadied. Yet, incumbent Mahinda R lost, for other reasons.

Predictions of imminent food shortage this time owes to President Gotabaya Rajapaksa’s meaningful decision to ban import of chemical fertilizer, on two counts. One, there is a growing global consensus, though not workable as yet, to end excessive use of chemical fertilizers, which make soil barren and add environmental hazards, both over time.

For countries like Sri Lanka, which do not and cannot manufacture required quantities of chemical fertilizers, ever-burgeoning import bills are also a concern. In the perilous economic situation that near-eternally harasses the nation, a ban on imported goods, fertilizers included, should be a boon. A dollar saved is a dollar earned, or that should be the way it should be looked at.

But then, the government’s stubbornness to enforce the ban here and now does not make sense. Yes, the economy is in a shambles even without Covid. But the Covid, coming as it did in the aftermath of the ‘Easter blasts’ even if distanced by around 12 months, has rendered the nation’s economy helpless and hapless.

It is not in terms of GDP and inflation rates alone. All of it translates into money in the bank, money in the pockets of individuals. Officials who quote statistics do not as yet take the loss of jobs and thus family incomes. Those that claim to have been educated in the West or look up to the West for solutions to the nation’s inevitable economic ills of all times, do not seem wanting to follow their models, of measuring economic progress in terms of jobs lost or added, by the month.

It is nobody’s case that all of it could now lead to a food crisis. But should a food crisis too hit the nation, there may not be an easy way out. If nothing else, the world has no time for Sri Lanka beyond Covid, as is the case with every Third World nation. Hence there is a need for those governments to be less-than-adventurous just now.

Yes, they need to spend less, import less and export more. Already, the nation is threatened with European Union’s GSP-Plus withdrawal in the name of alleged war crimes and other human rights violations. Importing natural fertilizer is not going to be easy or cheaper especially if you are going to hunt around for the same after laying your farm lands barren.

The right way would have been to cut down fertilizer imports, whether chemical or natural, in stages and phases and impose a ban when the nation is self-sufficient, in either or both. That is not happening, and there is concern already even from the ruling SLPP’s future electoral performances, starting with the much-delayed Provincial Council polls.

For, a ban on import of quality turmeric for the Sri Lanka dining table has led to black-marketing, hence huge price-rise, or the poor having to go with a limited use of what used to be a taken-for-granted ingredient in their daily menu, cutting across ethnicity, language and religion.

The last time a food crisis hit the nation, in the early years of Independence, Sri Lanka, then Ceylon, resorted to the famous/infamous ‘Rice-for-Rubber Pact’ with China, again a young nation, which had proclaimed a Communist government only in 1949. That started off a relationship that has stood the ‘test-of-times’, if you have to borrow words from the Sinhala-Buddhist political class of electoral hues.

Today, when bilateral relations have been cemented to such an extent that any new pact of the kind, with food as the nation’s import item, Colombo does not have dollars or even euros or LKR to pay for. It may have to be through a contrived way of payment, involving either Sri Lankan territory, sovereignty or both. Will Chinese yuan/renminbi become the new trade currency for the nation? A far-fetched thought just now, yes.

But unlike in the distant past, the nation knows not to blame the Nature for its woes, but only the political rulers of the day, instead. That is also saying a lot in terms of the nation’s foreign and security policy, especially when read with Hambantota and Colombo Port City projects, among others!